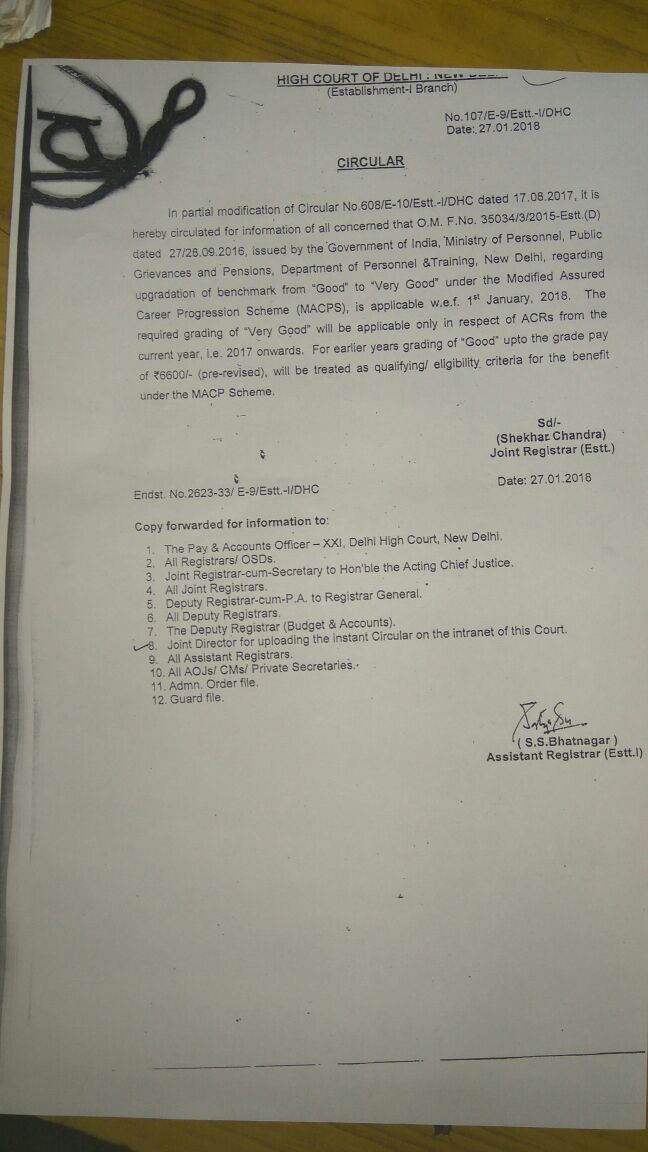 Posted by Confederation Of Central Government Employees at 4:53 PM No comments: 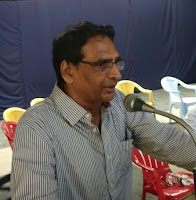 Posted by Confederation Of Central Government Employees at 4:50 PM No comments: 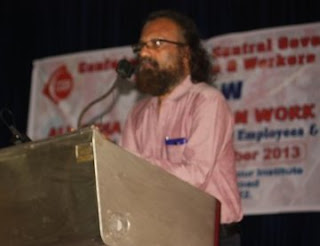 International Conference (Congress) of SIGTUR (Southern Initiative on Globalisation and Trade Union Rights) an organisation unifying various organisations in different countries fighting against neo-liberal globalization policies and for trade union rights, is being held at Buenos Aires, the Capital City of Argentina from 2018 April 4th to 6th.

Posted by Confederation Of Central Government Employees at 4:24 PM No comments:

AMENDMENT OF INSTRUCTIONS REGARDING DEARNESS RELIEF TO RE-EMPLOYED PENSIONERS CONSEQUENT ON REVISION OF IGNORABLE PART OF PENSION FOR FIXATION OF PAY IN THE RE-EMPLOYMENT POST – REG. (click here to view)

Posted by Confederation Of Central Government Employees at 2:08 PM No comments:

Dearness Allowance to the employees of Central Government & Central Autonomous Bodies drawing pay as per 6th CPC w.e.f 01.01.2018 (Click the link below to view)
https://doe.gov.in/sites/default/files/DA%206th%20CPC%20eng_0.pdf

Posted by Confederation Of Central Government Employees at 2:37 PM No comments:

PROVISION OF TELEPHONE FACILITIES AND REIMBURSEMENTS TO OFFICERS OF GOVERNMENT OF INDIA (Click the link below to view)
https://doe.gov.in/sites/default/files/Amended%20Telephone%20OM%20%2827.3.2018%29_0.pdf

Posted by Confederation Of Central Government Employees at 12:33 PM No comments:

The Payment of Gratuity (Amendment) Bill, 2018 has been passed by parliament today. The bill ensures harmony amongst employees in the private sector and Public Sector Undertakings/Autonomous Organizations under Government who are not covered under CCS (Pension) Rules. These employees will be entitled to receive higher amount of gratuity at par with their counterparts in Government sector. The bill was passed by the Rajya Sabha today and the Lok Sabha on 15 March, 2018.
The Payment of Gratuity Act, 1972 applies to establishments employing 10 or more persons. The main purpose for enacting this Act is to provide social security to workman after retirement, whether retirement is a result of superannuation, or physical disablement or impairment of vital part of the body. Therefore, the Payment of Gratuity Act, 1972 is an important social security legislation to wage earning population in industries, factories and establishments.

The present upper ceiling on gratuity amount under the Act is Rs. 10 Lakh. The provisions for Central Government employees under Central Civil Services (Pension) Rules, 1972 with regard to gratuity are also similar. Before implementation of 7th Central Pay Commission, the ceiling under CCS (Pension) Rules, 1972 was Rs. 10 Lakh. However, with implementation of 7th Central Pay Commission, in case of Government servants, the ceiling has been raised to Rs. 20 Lakhs.

After enactment of the Act, the power to notify the ceiling of the amount of gratuity under the Payment of Gratuity Act, 1972 shall stand delegated to the Central Government so that the limit can be revised from time to time keeping in view the increase in wage and inflation and future pay commissions.
Source: PIB

MAJOR CHANGES IN NPS – RELAXATION NORMS
Relaxation of Norms for NPS
The Government of India has recently made three changes in the National Pension Scheme (NPS) including withdrawal norms. The details are as under:

Partial withdrawal during the service: The Pension Fund Regulatory and Development Authority (PFRDA), with an objective to meet the subscriber’s sudden financial requirement enrolled under NPS, has liberalized norms for partial withdrawals which also include reduction of requirement of minimum years of being enrolled under NPS from 10 years to 3 years from the date of joining. Suitable amendments were made through “Pension Fund Regulatory and Development Authority (Exits and Withdrawals under the National Pension System) (First Amendment) Regulations, 2017 and the same has been notified on 10.08.2017.

Increase in the joining age under NPS: With an objective to allow individuals (under NPS-All Citizen Model and Corporate Sector Model) who are in the age bracket between 60 years and 65 years to join NPS system. Suitable amendments were made through “Pension Fund Regulatory and Development Authority (Exits and Withdrawals under the National Pension System) (Second Amendment) Regulations, 2017 and the same has been notified on 06.10.2017.

This was stated by Shri Ship Pratap Shukla, Minister of State for Finance in a written reply to a question in Lok Sabha today.
Source: PIB
AADHAAR IS NOT COMPULSORY TO GET PENSION

Adhaar is not mandatory to get pension: Dr Jitendra Singh

During the meeting, Dr. Jitendra Singh said that the SCOVA which was first constituted in July, 1986 would be completing 32 years this year. He said this platform has gone a long way in addressing in a focused manner issues related to Pensioners. He said that today’s interaction was very meaningful and stimulating, thus reflecting on the working of DoP&PW. The Minister while assuring the representatives of pensioners’ Associations said that it was no more mandatory to have one’s Adhaar Card to get his/her pension.

The Minister said that the Department of Pensions has brought out a series of OMs to benefit the Pensioners/Family Pensioners in the last 12 months including enhancing of minimum pension from Rs.3500/- to Rs.9000/- per month; the ceiling of gratuity has been increased from the existing Rs.10 lakhs to Rs.20 lakhs; the rates of ex-gratia lump sum compensation being paid to the families of employees who die in performance of duty has been increased from existing Rs. 10-15 lakhs to Rs.25-45 lakhs. He also said that divorced daughter will be eligible for family pension if divorce case has been filed before the death of pensioner/family pensioner, even though the judgment has been passed after the death of the pensioner /family pensioner.

Dr. Jitendra Singh said that this Government has given relief to the senior citizens and Pensioners in the Budget 2018-19 by allowing Standard Deduction of Rs. 40,000/- per year to the Pensioners and given exemption on tax on account of interest income from bank savings accounts has been increased to Rs. 50,000/ from Rs. 10,000/- per year. Deduction on account of health insurance premium which was earlier allowed at maximum of Rs.30,000/- has now been increased to Rs. 50,000/- in the case of Senior Citizens/Pensioners.

While addressing the meeting he said that we need to put in place an institutionalized mechanism to make good use of the knowledge, experience and efforts of the retired employees which can help in the value addition to the current scenario. Dr. Jitendra Singh said the retired employees are a healthy and productive workforce for India and we need to streamline and channelize their energies in a productive direction. We should learn from the pensioners’ experience, he added. The Minister also said that the DoP&PW should be reoriented in such a way that pensioners become a part of nation building process.

In the meeting, discussions were held on the action taken report of the 29th SCOVA meeting. Further many issues related to pensioners were discussed threadbare, such as revision of PPOs of pre-2006 pensioners, Health Insurance Scheme for pensioners including those residing in non-CGHS area, Special “Higher” Family Pension for widows of the war disabled invalidated out of service, Extension of CGHS facilities to P&T pensioners, issue relating to CGHS Wellness Centre, Dehradun etc. The Minister directed for the prompt and time bound redressal of the grievances of the pensioners and said that we should have sympathetic attitude towards them.

Source: PIB
Posted by Confederation Of Central Government Employees at 4:22 PM No comments:

Posted by Confederation Of Central Government Employees at 12:03 PM No comments: 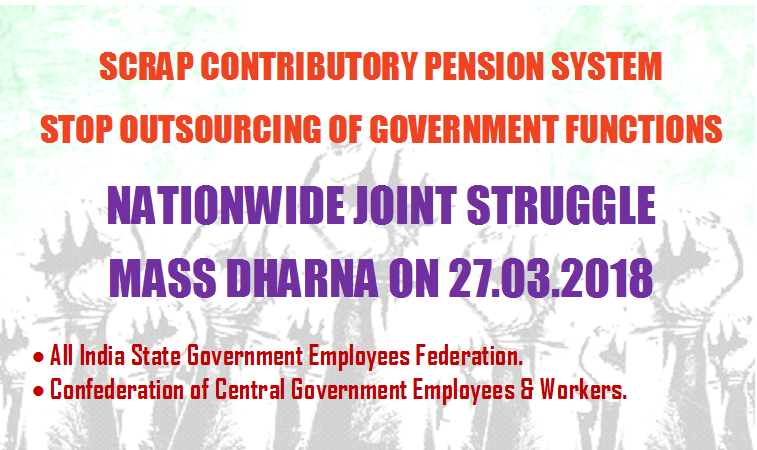 Posted by Confederation Of Central Government Employees at 4:43 PM No comments:

Posted by Confederation Of Central Government Employees at 7:03 AM No comments:

Hon’ble Delhi High Court vide its judgement dated 17.07.2015 in the Writ Petition (C) No. 844/2014 – Rama Pandey vs. Union of India &Ors., has laid down that a female employee, who is the commissioning mother, would be entitled to apply for maternity leave. Department of Personnel and Training, after examination of the judgement, has circulated it to all Ministries/Departments for wide publicity vide Office Memorandum dated 29.01.2018.

In accordance with the Office Memorandum No. 1/13/09- P&PW (E) dated 19th July, 2017, family pension would also be granted to a divorced daughter from the date of divorce in cases where the divorce proceedings had been filed in a competent court during the life-time of the employee/pensioner or his/her spouse but divorce took place after their death, subject to fulfilment of all other conditions for grant of family pension.

No centralized data regarding grant of pension/family pension by the various Pension Disbursing authorities is maintained.

This was stated by the Minister of State for Personnel, Public Grievances & Pensions and Prime Minister’s Office, Dr. Jitendra Singhin a written reply to question in the Lok Sabha today.