HAPPY MAY DAY
GREETINGS OF MAY DAY TO   ALL COMRADES

Posted by Confederation Of Central Government Employees at 4:52 PM No comments:


http://ccis.nic.in/WriteReadData/CircularPortal/D3/D03ppw/om_29042016.pdf
Posted by Confederation Of Central Government Employees at 12:30 PM No comments:

In accordance with Supreme Court judgment dated 15.07.2014, results of Limited Departmental Competitive Examination 1996 for Section Officer grade were revised by UPSC. Appellants, who were declared successful in the modified results of SO LDCE 1996, were included in SOSL 1996 by this Department. Later the benefit was extended to similarly placed SC/ST officers who were declared qualified in the modified results of SO LDCE 1996. On their inclusion in SOSL 1996, these officers have become eligible for consideration for promotion to the next grade (Under Secretary) on completion of eight years of approved service in SO grade i.e. they become eligible for consideration in USSL 2004 onwards subject to the size of the zone. A proposal for review of USSLs 2004 and 2005 has been forwarded to UPSC in which these officers have been included in the zone.

This was stated by the Minister of State (Independent Charge) for Development of North Eastern Region (DoNER), MoS PMO, Personnel, Public Grievances, Pensions, Atomic Energy and Space, Dr. Jitendra Singh in a written reply to a question by Shri Ronald Sapa Tlau in the Rajya Sabha today.

Source: PIB
Posted by Confederation Of Central Government Employees at 12:21 PM No comments:

1.       CONFEDERATION ALL INDIA CONFERENCE PRE-PONED TO 2016 AUGUST 16TH,17TH&18TH
Diamond Jubilee year National Conference of the Confederation of Central government Employees & Workers will be held at Chennai on  16th,17th&18th August 2016. Confederation was formed on 16.08.1956. The conference is pre-poned from 26th, 27th & 28th August to 16th, 17th & 18th, as the All India general Strike is on 2nd September 2016. The above dates are final. Notice for the National Conference will be issued shortly.

All India women’s convention of the confederation will also be held along with the National Conference.
All affiliated organisations of the Confederation, All C-O-C’s and all CHQ office bearers and Women’s subcommittee members are requested to decide the names of Delegates/Visitors attending National Conference and  All India Women’s convention, well in advance and book their up and down travel tickets without any delay. Last minute, it will be very difficult to get confirmed tickets.

2.     CELEBRATE DIAMOND JUBILEE OF CONFEDERATION IN ALL STATES BY THE C-O-Cs IN A BEFITTING MANNER BY ORGANIZING AT LEAST ONE PROGRAMME BY EACH C-O-C.
Confederation was formed in the year 1956. The idea was mooted by Com. B N Ghosh, then Secretary General of NFPTE. There were many demands of the Central government Employees which were of a general nature concerning all the Central Government Employees. It was felt by Com B N Ghosh that an organization of all Central Government Employees is required for wider unity and struggle. As such he approached all the Unions and Federations in the central government establishments. Railway and defense federations did not show much interest. However other central government employees organisations showed much enthusiasm.

A joint meeting of all the willing Unions/Federations was held at New Delhi on 16th August 1956 presided by Shri Sarangdhar Das, Member of Parliament. Detailed discussion took place and “Confederation of Central Government Employees & Workers” was formed. Nath Pai, Member of Parliament, was elected as Chairman and S Madhusoodhanan of Civil Aviation was elected as Secretary General. Rest is history. In the formation meeting on 16th August 1956 only ten organizations participated. The number of affiliates went on increasing year by year and as on date Confederation is having 112 affiliated organizations.

All the C-O-Cs are requested to celebrate the diamond jubilee in most befitting manner by organizing at least one program by each C-O-C. Senior leaders may be honored in the function.

3.  ALL INDIA TRADE UNION EDUCATION CAMP – 24TH & 25TH MAY 2016- DEHRADUN (UTTARAKHAND)
As already notified, the All India Trade Union Education Camp - 2016 of Confederation will be held at Dehradun on 24th & 25th May 2016. The last two camps held at Mumbai (2014) & Bangalore (2015) was a grand success. The COC Dehradun is actively involved in making all the arrangements for successful conducting of the camp. Detailed circular regarding classes, venue, food, accommodation, climate, contact phone numbers etc will be published shortly. Delegate fee per head is fixed as Rs.600/- (Rs Six hundred only).

All the affiliated organisations and C-OC’s are once again requested to depute the given number of delegates to the camp. The Quota fixed is furnished below.

Please instruct the delegates to book their travel tickets immediately.

4.       OBSERVE MAY DAY JOINTLY WITH OTHER FRATERNAL ORGANISATIONS:
2016 May 1st may be observed as May Day at all important centers jointly with other fraternal organisations. The importance of the International Workers Day and the need to strengthen the unity of working class by building up class-oriented militant struggle against the imperialist neo liberal globalization policies may be explained to the workers

5.       ALL INDIA GENERAL STRIKE :
The national convention of workers at Mavilanka Hall,  New Delhi on 30.03.2016 under the banner of all Central Trade Unions(except BMS) and other Federations/Unions/Associations has decided to organize one day ALL INDIA GENERAL STRIKE  on 2nd September 2016 against the anti - people anti- labor policies of the NDA Govt. The national Secretariat of the Confederation of Central Government Employees and Workers call upon all its affiliated organizations and C-O-Cs to conduct intensive campaign and preparations for ensuring maximum participation of Central government Employees in the general strike. All affiliated organisations are requested to issue their own separate circulars to their lower units instructing them to participate in the strike. Central Government Employees are the worst victims of the neo liberal policies of the NDA Government and hence it is our duty to make the strike a grand success.

6.  GET READY FOR INDEFENITE STRIKE FROM 2016 JULY 11TH ON 7TH CPC RELATED CENTRAL GOVERNMENT EMPLOEES DEMANDS.
The National Joint Council of Action (NJCA) has decided to serve indefinite strike notice to the Govt on 9th June 2016 and to commence indefinite strike from 11th July 2016, if the Govt fails to come to a negotiated settlement on 7th CPC related issues with the JCM National Council Staff Side. In the discussion held on 1st March 2016 with the empowered committee of Secretaries headed by Cabinet Secretary, the Government has not disclosed its mind on any of the demands including minimum wage. Thereafter no discussion took place. NJCA has given enough time as requested by the Government by postponing the strike to July 11th. 7th CPC report was submitted to Govt on 19th November 2015 and almost five months are over now. The developments that are taking place in the country shows that Modi Govt is becoming more and more and more aggressive towards the workers and common people. Unless we go for an indefinite strike, the Govt may not modify the retrograde recommendations of the 7th CPC. Confederation National Secretariat calls up on all its affiliates and C-O-C’s to continue the campaign and prepare the rank and file membership to go for indefinite strike from July 11th. All affiliates should serve the strike notice on June 9th to their respective Departmental heads. Copy of the strike notice should be sent to all lower units without fail. Branch/Units of some of the affiliates of confederation has complained that their All India leadership has not issued any circular or instructions to them to participate in the strike. Without getting instructions from higher bodies they are reluctant to participate in the strike. Hence it is once again requested to all affiliates of Confederation that:-
(1)    Clear instructions may be issued to all lower units now itself to participate in the July 11th indefinite strike.
(2)    Copy of the strike notice served to the Departmental head on  9th June 2016 should be sent to all lower units

With May Day Greetings


Secretary General
Posted by Confederation Of Central Government Employees at 4:41 PM No comments: 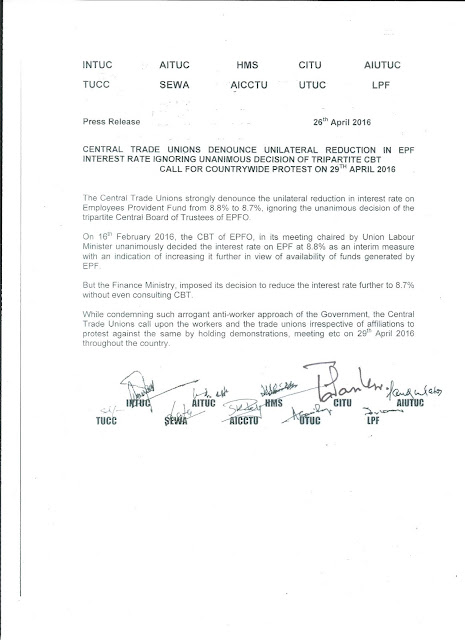 Posted by Confederation Of Central Government Employees at 12:49 PM No comments:

Posted by Confederation Of Central Government Employees at 5:17 PM No comments: 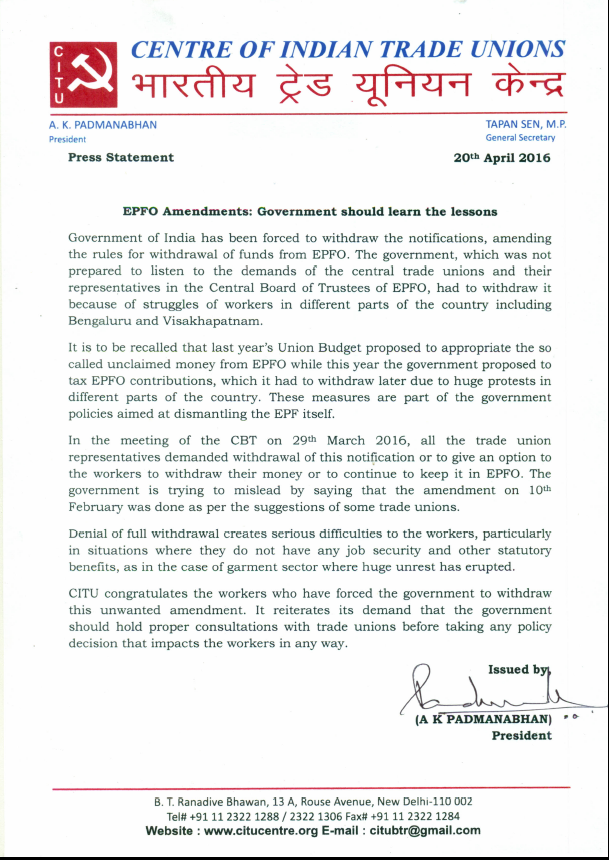 Posted by Confederation Of Central Government Employees at 3:33 PM No comments:

In the event of Travel by private airlines or non-purchase of Air India LTC-80 air ticket, the employee concerned will not be reimbursed with the Air fare claimed under LTC.
However, in case of non-availability of Air India Flights to destination for which travel by LTC is planned, travel under LTC 80 Air tickets can be relaxed on case to case basis
Documents required by Air India for purchasing LTC 80 Air Tickets:
Official ID card. In the case of purchasing LTC 80 Air Tickets for Family members they have to carry the copy of the Identity Card of the employee.

One Year from the date of Issue

Discount applicable to Children and Infants for LTC 80 Air Fare:

Normal discount on the class of travel in respect of Children and they are not entitled to any additional discount. In the case of Infants (Under 2 years) 1st accompanying Infant – Rs.1000 per coupon, Plus applicable taxes. 2nd and more Infants, no discount permissible.

Change of Date and Cancellation of LTC 80 Air Tickets:

Change of Date of Travel and Cancellation of LTC 80 Air Tickets are allowed subject to payment of fee applicable.
Author’s Note: Government insists for purchasing Air India LTC 80 Air tickets for the reasons that these tickets are entititled to Change of dates and cancellation by default. So, neither the Govt nor the employee will incur loss in the event of change of date or cancellation of Travel Plan. In fact, there are many types of Air Fares are available in Air India itself which will be lesser than LTC 80 Air fare after dicounts. However, Air Tickets in discounted price will not be allowed for changing date of travel or cancellation of tickets.
Posted by Confederation Of Central Government Employees at 3:30 PM No comments: