Posted by Confederation Of Central Government Employees at 8:15 AM No comments:

Posted by Confederation Of Central Government Employees at 7:50 PM No comments: 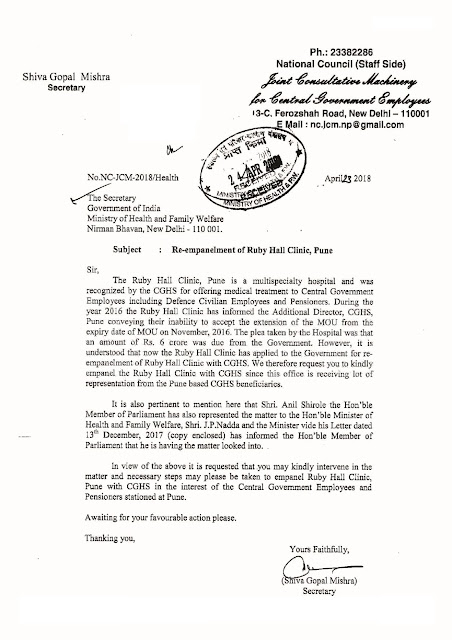 Posted by Confederation Of Central Government Employees at 4:34 PM No comments: 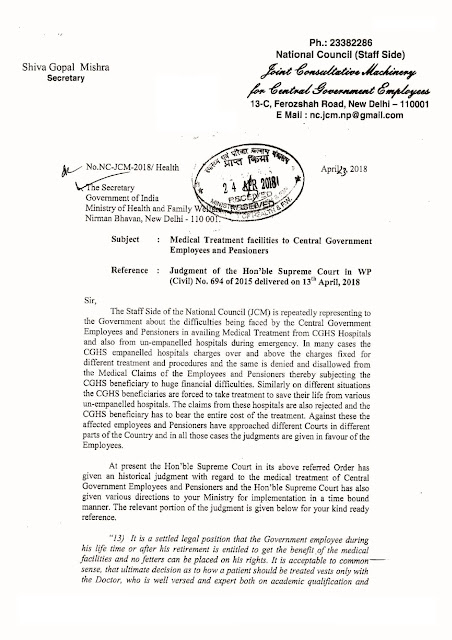 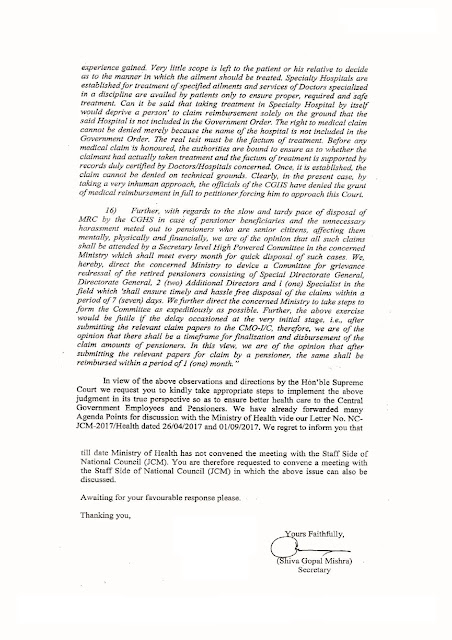 Posted by Confederation Of Central Government Employees at 4:30 PM No comments: 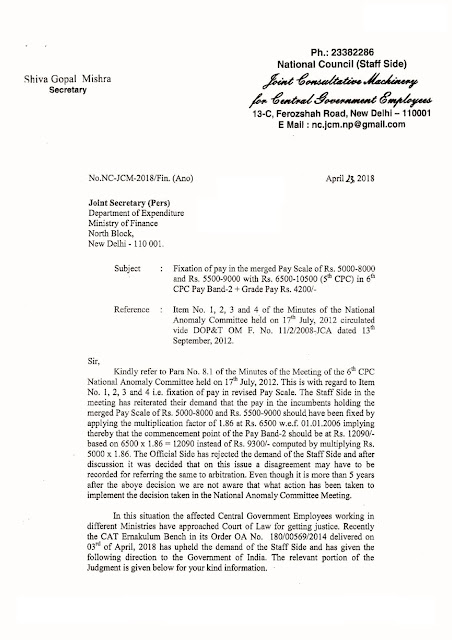 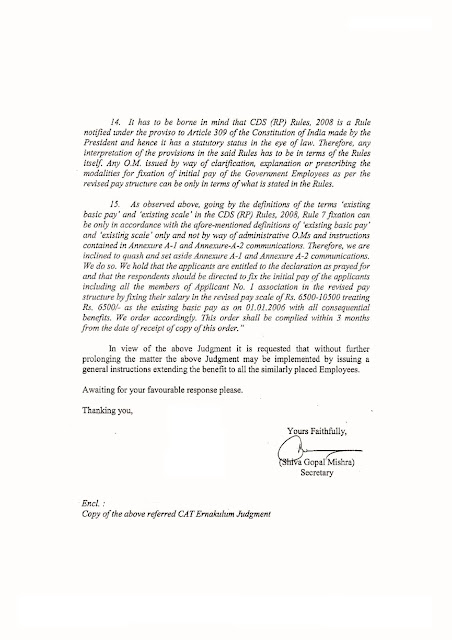 Posted by Confederation Of Central Government Employees at 4:25 PM No comments:

May Day 2018: With Internationalism and Solidarity

The World Federation of Trade Unions (WFTU) in the name of its more than 92 million affiliates all over the world salutes, on the occasion of this great day, all the workers who live, work and struggle in every corner of the world. May Day was, is and will be a beacon for the struggles of yesterday and tomorrow despite our enemies’ efforts. May Day has to be a message of resistance against bourgeoisie, imperialists and their international alliances’ policies.

At the same time, the workers’ blood which was shed in Chicago on 1886 reminds us of our duty today; it reminds us that nothing is given for free; every right or freedom that was conquered by our class has been won through sacrifices, conflicts and organized struggles.

Today, whilst technology and scientific progress have contributed to the increase of the produced social wealth, our class’ living conditions have been deteriorating. In every capitalist country, the bosses attack our class achievements: they are sweeping through salaries, pensions and social security; they are privatizing everything, they don’t hesitate to attack even the sacred right to strike! Strike is the most powerful weapon we have in our hands and we are not going to allow anyone to limit, confine or convert it to a dead letter!

At the same time, they are intensively preparing and conducting regional wars.They pave the way for new massacres that will maximize their profits, for new imperialist interventions that will destroy nations, spill peoples’ blood and deprive them of their natural resources. The ongoing imperialist intervention in Libya and Syria, the growing aggression against Venezuela, the US decision to recognize Jerusalem as the capital of Israel, the massacre of Saudi Arabia against Yemen, the tension on the Korean peninsula, they are all indications that multinationals have smelled new profitability areas; and every time this goes through the dead bodies of workers.

Under the current conditions of the deep economic crisis of capitalism and intense competition among various imperialist centers to control new markets, our most powerful weapons are INTERNATIONALISM and SOLIDARITY. No worker must feel alone. All together, we must move on with Solidarity and Internationalism, building the Unity of the working class to give practical effect to Karl Marx’s motto “proletarians of all countries unite”.

In this context, and on this anniversary, the WFTU expresses its solidarity with our persecuted brothers, the immigrants and refugees, who either because of imperialists’ bullets or because of poverty and misery generated by this system, are forced to leave their homeland. The WFTU will continue to be on their side, fighting for a world without exploitation and refugees. Immigrants must become an integral part of unions, unite with local workers and fight together for wages, rights, against wars and interventions.

We join our voice with the heroic Palestinian people in order to gain their own independent and democratic homeland.

At the same time, we stand by the side of the struggling female worker, the one who suffers from double exploitation. The WFTU female members, at the recent World Women’s Congress in Panama, declared loud and clear that they want equal rights to work, society and life. The WFTU also fights and will continue to fight for this equality. It’s the same orientation that we follow for the the youngsters, as the new generation of workers have the task to honor the best May Day struggle traditions.

This year, the WFTU, by giving its hand to anyone who has stood up, has announced the year of trade union education and training. Our purpose is that the new shifts of workers be insubordinate, militant, enemies of class compromise and collaboration. We honor the year of trade union training and we call on every union to contribute to the militant truth, revealing the true meaning of May Day and the sacrifices the working class made for it. By rescuing the past, the very memory of our movement, we leave a legacy for tomorrow’s struggles and we also have a tool for the future. It is a duty to know the history of our movement.

The WFTU takes steps forward, strengthens and grows: and that’s what frightens our opponents. There is no other way than to make it present everywhere, in every corner of the world, so that there is no longer a hungry, dismissed, hunted or persecuted worker. The WFTU must be a “trench” of struggle for a future without exploitation of man by man. This is how the vision of the first Secretary General of the WFTU, Luis Saillant, envisioned in 1945 will be brought to life:

“The WFTU for the workers of the whole world!”

Posted by Confederation Of Central Government Employees at 3:54 PM No comments:


Posted by Confederation Of Central Government Employees at 2:58 PM No comments: 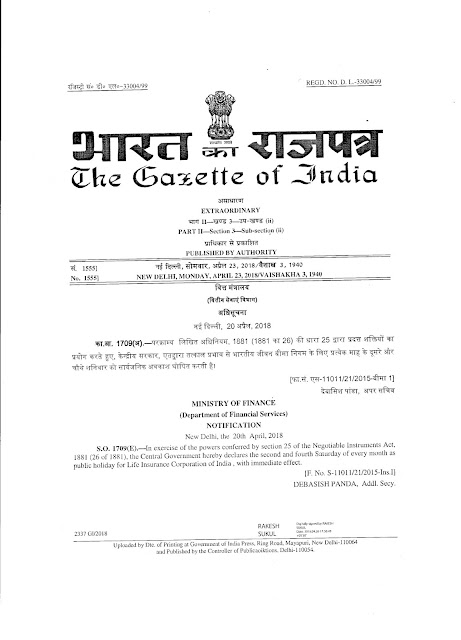 Posted by Confederation Of Central Government Employees at 11:56 AM No comments: 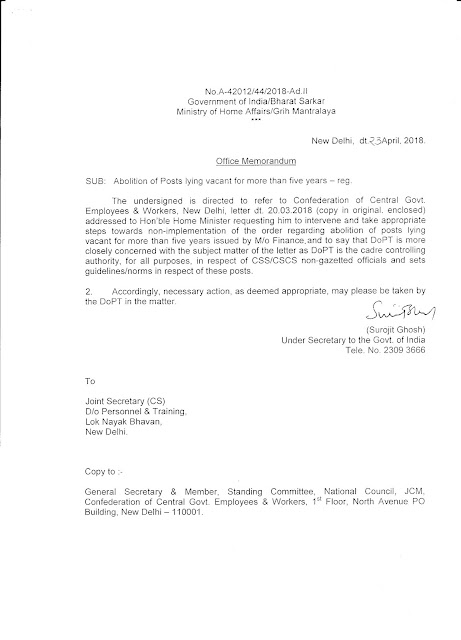 Posted by Confederation Of Central Government Employees at 11:51 AM No comments:

Subject: Common mistakes by PAOs in processing of Revision of Pension under
7th CPC .

7th CPC Pension Revision cases are to be settled in a time bound manner. This office is receiving more than 3000 pension revision cases on daily basis. However, it has been observed that about 5 to 10 percent cases are returned by this office to PAOS due to Various discrepancies. The reasons to return are indicated by this office in each case. To facilitate the PAOs, a list of common mistakes made by PAOs has been prepared and enclosed herewith at Annexure-A.

In view of above all the PAOs are requested to ensure that 7th CPC revision cases are sent correctly to CPAO to speed up the processing of the same in a time bound manner.
Encl: As above
(Md.Shahid Kamal Ansari)
Asstt. Controller of Accounts)
Ph No 011‐26103074


Posted by Confederation Of Central Government Employees at 12:28 PM No comments:

MINISTRY OF FINANCE
PENSION FUND REGULATORY AND DEVELOPMENT AUTHORITY PRESCRIBES NEW NPS SUBSCRIBER REGISTRATION FORM: ADDITIONAL MANDATORY REQUIREMENTS
Pension Fund Regulatory and Development Authority (PFRDA) has been established by the Government of India for regulation and development of Pension Sector in order to protect the old age income security of subscribers. PFRDA takes various initiatives from time to time in order to simplify and improve the operational issues in National Pension System (NPS) like new functionality development under NPS architecture, simplification of account opening, withdrawal, grievance management etc. In this regard, it has been decided by the Authority to make bank account details and mobile no. mandatory to provide ease of operation for the benefit of subscribers and make the process of Exit from NPS hassle free.

Further, in compliance with the Prevention of Money Laundering Act guidelines issued by the Government of India, Foreign Account Tax Compliance Act (FATCA) and Central Registry of Securitization Asset Reconstruction and Security Interest (CERSAI) have been made mandatory for new as well as existing subscribers. These have been made mandatory in the new Common Subscriber Registration Form (CSRF) forms that are required to be filled in by the new subscribers. The existing subscribers have been provided the facility to submit online FATCA Self-Certification in their login (www.cra-nsdl.com or https://enps.karvy.com/Login/Login ). The information regarding the said functionality is also made available on Central Record-keeping Agency (CRA) websites. The steps to be followed by the subscriber to submit online FATCA self-certification are also mentioned on the website.

It is to be ensured by the subscribers to fill the mandatory fields correctly and not leave them blank in order to avoid rejection of their forms.
DSM/RM /AS

Posted by Confederation Of Central Government Employees at 11:05 AM No comments:

****************
Payment of dearness relief to re-employed pensioners and employed family pensioners: Clarification thereof.
(Click the link below to view)
http://pcdapension.nic.in/pcdapension/6cpc/Circular-200.pdf

Posted by Confederation Of Central Government Employees at 1:29 PM No comments:

CONSTITUTION OF FORMULARY COMMITTEE FOR NEW EDITION OF POSTAL FORMULARY FOR THE YEAR 2018-2020 – REG. (Click here to view)

PROPOSAL OF THE STAFF SIDE TO RECORD DISAGREEMENT OF THE UNSETTLED 6TH CPC ANOMALIES AND TO REFER THE SAME  ARBITRATOR.(Click here to View)

Posted by Confederation Of Central Government Employees at 11:44 AM No comments: 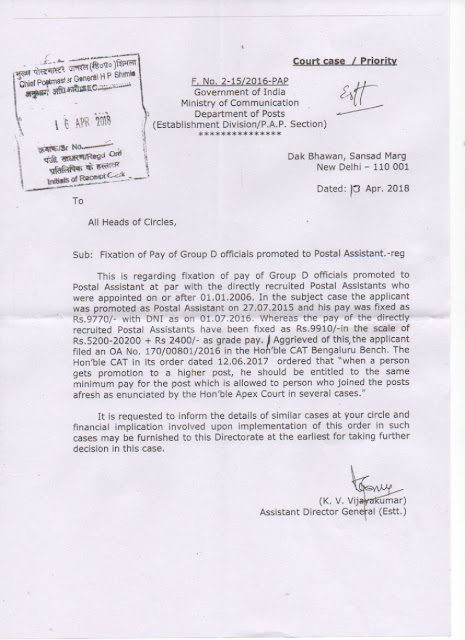 Posted by Confederation Of Central Government Employees at 3:34 PM No comments:

Attack on the working class and peasants as a whole and Central Government Employees in particular are mounting day by day. The entire working class and peasantry are on struggle path. The farmers long march in Maharashtra is the latest mass struggle. None of the 7th CPC related demands of Central Government Employees are settled. The assurance given by the Group of Ministers to the NJCA leaders regarding increase in Minimum Pay and Fitment formula is in paper even after a lapse of 20 months. Now the Finance Minister has replied in Parliament that “no change in Minimum Pay and Fitment formula is at present under consideration”. Employees who joined service after 01.01.2004 are retiring with a megre pension of 1000 to 2000 rupees only under the NPS Scheme. In effect, New Pension System has become No Pension System. Six lakhs posts are lying vacant for the last many years and now Govt. has issued orders to abolish all posts lying vacant for more than five years. HRA arrears, MACP Bench mark, Option-I for pensioners – Govt. is not ready to reconsider their stand. Three lakhs Gramin Dak Sevaks of the Postal department are waiting for two years for their legitimate wage revision. Exploitation of Casual and contract workers continue and equal pay for equal work is denied to them. Large scale outsourcing and privatization has become the order of the day. Privatisation of Railways and outsourcing of the work done by Defence employees are in full swing. 12 out of 17 Govt. of India Printing Presses are ordered to be closed. Same is the fate with other departmental printing presses including Railway printing presses. Autonomous body employees and pensioners are denied their rightful wage revision and pension revision due to the stringent conditions imposed by the Finance Ministry. Compassionate appointments have become a mirage.

Trade Union rights are denied. Orders banning dharna and demonstrations are issued. The draconian FR 56 (j) and Pension Rules 48 are misused as a short-cut to punish and victimize employees. JCM forums have become mere talking shops without any positive results. Recognition under CCS (RSA) Rules are delayed and Departmental Councils have become dead in many departments. Govt. sponsored unions are given undue patronage. Recognition of fighting organisations are withdrawn on flimsy grounds and trade union facilities are denied to the Chief Executives of recognised Associations.

All delegates may be instructed to book their up and down travel tickets immediately as train tickets reservation commences four months before. Food and Accommodation to delegates will be arranged by the C-O-C Andhra & Telangana, Hyderabad. Delegate fee is fixed as Rs.500/- (Rs. Five hundred only) per head. For other details C-O-Cs and affiliates are requested to contact the following.

National Federation of Printing, Stationery & Publications Employees (NFPSPE) and Confederation Delhi State Committee will jointly organize a mass protest Dharna at New Delhi (Venue will be decided later) on 27th April 2018 at 10 AM. Available National Secretariat Members at New Delhi shall also attend the Dharna programme. It is also decided to have another round of discussion with authorities through JCM (NC) staff side at the earliest.
ALL INDIA WOMEN’S TRADE UNION WORKSHOP

C-O-C Uttar Pradesh (Lucknow) will decide the Venue and dates of the workshop in consultation with CHQ. Details will be informed later.