Posted by Confederation Of Central Government Employees at 1:11 PM No comments:

Posted by Confederation Of Central Government Employees at 6:52 PM No comments:

COMPLIANCE OF COVID PROTOCOLS WHILE OBTAINING LIFE CERTIFICATES FROM PENSIONERS

Posted by Confederation Of Central Government Employees at 3:20 PM No comments:

CONFEDERATION CALLS UPON ALL CONSTITUENTS TO EXTEND SOLIDARITY SUPPORT :

The Joint Platform of Central Trade Unions, independent sectoral Federations and Associations congratulates the farmers of India who are relentlessly fighting demanding repeal of the three farm laws, withdrawal of the Electricity (Amendment) Bill 2021 and for legally guaranteed MSP since more than nine months, under the leadership of the Samyukta Kisan Morcha (SKM).

They also congratulated the SKM for its mammoth rally in Muzaffarnagar on              5th September 2021, launching the ‘Mission Uttar Pradesh’ and ‘Mission Uttarakhand’. The SKM has called for the defeat the incumbent governments in these states, which are not only implementing the anti-farmer, anti-people and anti-worker neoliberal policies but also trying to create divisions among the people and polarise society on communal lines, to weaken united struggles. Ignoring the Writing on the walls bound to spell the doom of the Central Government.

The conduct of the Central Government in its second term not only shows its complete disconnect with the demands of the toiling people, it seems to be deliberately using this period of pandemic to hurry through its pro-corporate agenda as if there is no tomorrow. The Platform condemns, along with the SKM, the Modi Government’s move to announce “National Monetisation Pipeline”, that is meant to hand over the people’s wealth to its corporate cronies. It is bound to burden the common masses with run-away price-rise, which has already become unbearable. Its latest move to tax even the interest in EPF accounts of workers is shocking.

The Platform takes note that there is wide support to the farmers agitation from the Trade Unions, along with other sections of the toiling people: the agricultural labour, students, youth and women. It has become a movement representing broad democratic aspirations of the people of India.

The recent incidents in Karnal, Haryana are condemnable and show the true face of the ruling party there. The Platform supports the programme announced by the SKM to gherao Haryana Mini Secretariat with a demand to act against the concerned Government official and compensate those affected by the brutal lathis charge 28th August.

The trade unions also express their gratitude for the SKM’s support to the struggle of the working class against the anti-worker labour codes.

The Joint Platform of Central Trade Unions and Independent sectoral federations/associations fully support the call of the SKM for observing ‘Bharat Bandh’ on 27th September 2021 and calls upon the entire working class, who are themselves fighting against the four labour codes, privatisation of PSUs in Banks, Insurance, Steel, Electricity, Coal, Petroleum, Defence, Railways, Ports, Air India, Airports, Telecom, Postal Dept, Space Science and Nuclear Science etc. are demanding universalisation of PDS, increase in MGNREGA budget, to ensure its total success through solidarity actions. The ‘Bharat Bandh’ on 27th September will give an emphatic message to the ruling party in the Central Government that the peasants and the working class, the two major sections that are the backbone of our society stand united in opposing its anti-people and anti-national policies. The ‘Bharat Bandh’ will be a strong warning to the present ruling party in the government that its machinations for communal polarisation, to disrupt unity of the people and weaken their struggles, to facilitate corporate loot and serve its masters and donors, within and outside the country, will not be allowed by the patriotic people of this country.

The Joint Platform of Trade Unions asserts that this united struggle will continue till the three farm laws and the four labour codes are scrapped and the attempts of the government to sell the country through its privatisation drive and NMP are stopped.

And Independent Sectoral Federations and Associations

Posted by Confederation Of Central Government Employees at 11:14 PM No comments:

WEBINAR ON GASTROINTESTINAL DISORDERS & ROLE OF YOGA ON 28 SEPTEMBER 2021

RETURN OF PPO IF PENSION HAS NOT BEEN CREDITED TO THE ACCOUNT OF THE PENSIONER FOR A PERIOD OF 3 YEARS AND ABOVE-REG.

Posted by Confederation Of Central Government Employees at 5:46 PM No comments:

GRANT OF DEARNESS RELIEF IN THE 5TH CPC SERIES EFFECTIVE FROM 01.07.2021 TO CPF BENEFICIARIES IN RECEIPT OF BASIC EX-GRATIA PAYMENT-REG

Subject: Conduct of adjourned poll in 03 Assembly Constituencies of West Bengal and Odisha and Bye-election in 159-Bhabanipur Assembly of West Bengal – Grant of Paid holiday to employees on the day of poll – regarding

The undersigned is directed to say that by the Election Commission of India, vide their letter No. 78/2021-EPS/ 969-Spl., Dated 07.09.2021, has announced schedule for the election in 03 Assembly Constituencies, namely, 56-Samserganj (AC), 58-Jangipur (AC), 110-Pipli (AC) and bye election in 159-Bhabanipur (AC) Assembly Constituency in West Bengal. The schedule of Poll is as follow.

2. In this regard, it is stated that the guidelines, have been issued by this Department, vide OM No. 12/14/99-JCA, dated 10.10.2001, regarding closure of Central Government Offices and grant of paid holiday on the date of election. A copy of the same is available on website www.persmin.nic.in. Accordingly, all the Central Government Offices and the Central Industrial Establishments, located in the relevant constituencies shall remain closed on the date of Poll. The employees concern shall be granted paid holiday on the date of Poll to enable them to exercise their right to vote.

3. The above instructions may also please be brought to the notice of all concerned.

Posted by Confederation Of Central Government Employees at 4:33 PM No comments:

Posted by Confederation Of Central Government Employees at 11:33 AM No comments: 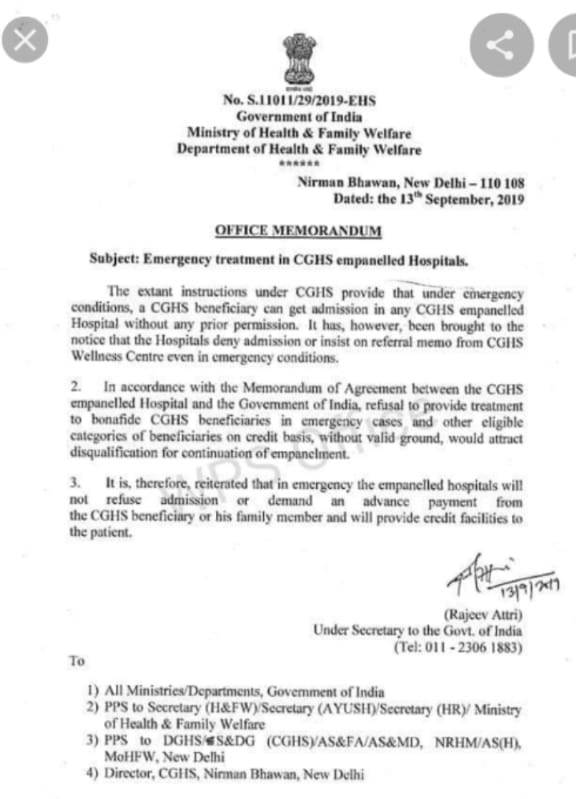 Posted by Confederation Of Central Government Employees at 2:22 PM No comments:

CLARIFICATION REGARDING FIXATION OF PAY AT THE TIME OF REGULAR PROMOTION / GRANT OF NFSG IN RESPECT OF OFFICIALS WHO ARE ALREADY GRANTED THE BENEFIT UNDER MACP SCHEME-REG. (CLICK THE LINK BELOW TO VIEW)

DIVORCE DAUGHTER IS NOT ELIGIBLE FOR COMPASSIONATE APPOINTMENT IF DIVORCED SUBSEQUENT TO DEATH: SUPREME COURT JUDGEMENT (CLICK THE LINK BELOW TO VIEW)

RELAXATION IN THE ELIGIBILITY SERVICE-CHANGE IN THE CRUCIAL DATE i.e. 1st JANUARY -REGARDING 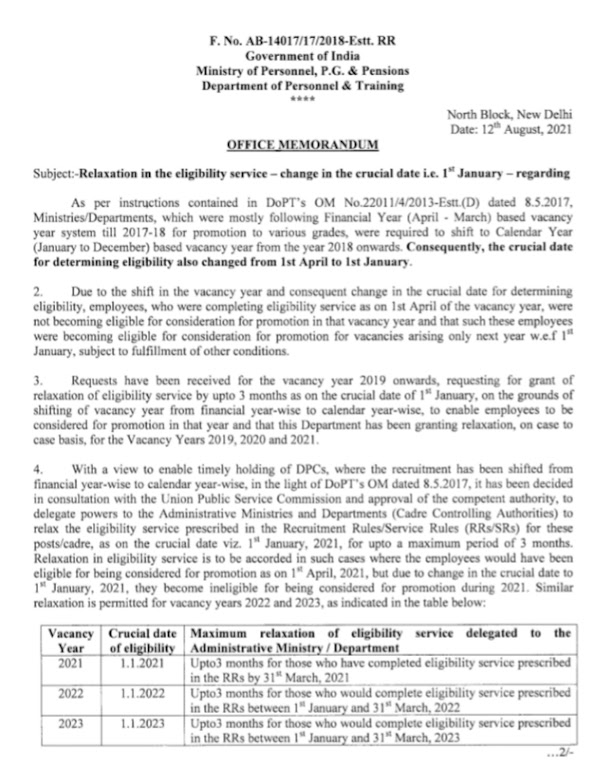 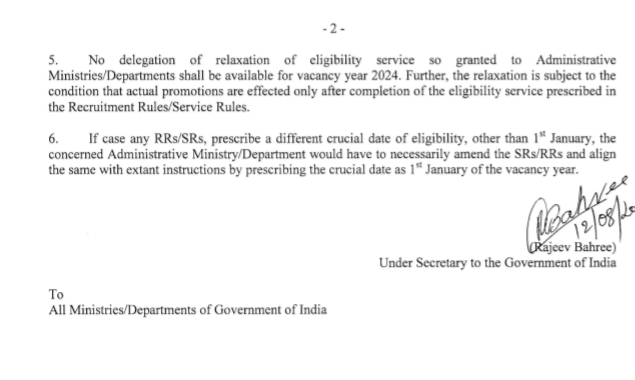 Posted by Confederation Of Central Government Employees at 11:09 AM No comments:

1 The respondent moved the Central Administrative Tribunal in OA 2410 of 1997 in which an order was passed on 17 August 1998 directing the respondents to the OA (the present petitioners) to consider the claim for regularization on the post of mason from the date of completion of 240 days’ continuous service on casual or work charged basis. The Tribunal also directed consequential benefits. A review petition against the order of the Tribunal was dismissed on 12 May 1999. The orders of the Tribunal were challenged before the High Court of Delhi. The High Court, by its judgment dated 15 July 2010, disapproved of the lethargy of the Department in effecting compliance. The order of the Tribunal was modified to the extent that the regularization of the respondent was directed to be considered in accordance with he rules.

2 Ms Aishwarya Bhati, learned Additional Solicitor General, has drawn the attention of the Court to:

3 The High Court of Delhi, has in the course of its judgment, alluded to the specific facts of this case, namely, that the respondent had been pursuing his claim right from 1997 before the Tribunal. The respondent was entitled to temporary status on the completion of 240 days’ continuous service. The respondent was regularized with effect from 11 December 2006. In the facts of the present case, particularly those noted above, the direction of the High Court to direct regularization with effect from the date of OA 2410 of 1997 need not be interfered with under Article 136 of the Constitution. Justice has been done to a mason who fought a long and arduous battle against the might of the State. The wider questions which are sought to be raised on behalf of the Union Government are kept open to be urged in an appropriate case. The ultimate direction which has been issued by the High Court is sustained on the individual facts as they pertain to the respondent before this Court.

4 The Special Leave Petition is accordingly disposed of with the above clarification.

5 Pending application, if any, stands disposed of.