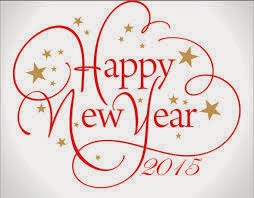 Posted by Confederation Of Central Government Employees at 1:56 PM No comments:

Due to unavoidable circumstances, the 7 th Central Pay Commission's visit to Kolkata / Andaman & Nicobar Islands has been rescheduled. As per the revised schedule, the Commission will visit Kolkata from 11th - 14th January, 2015.
Posted by Confederation Of Central Government Employees at 1:23 PM No comments:

Clarification regarding issue of medicines under CGHS

No. 2-2/2014/CGHS(HQ)/PPTY / CGHS(P)
Government of India
Ministry of Health & Family Welfare
Department of Health & Family Welfare
Nirman Bhawan, Maulana Azad Road
New Delhi 110 108
Dated: the 23rd December, 2014
OFFICE MEMORANDUM
With reference to the above mentioned subject the undersigned is directed to state that the situation arising out of issue of Office Memorandum No 2/2014/CGHS(HQ)/PPTY / CGHS(P) dated the 25th August ,2014 has been engaging the attention of Government for quite some time. Various representations about the difficulties being encountered have been received from different stakeholders i.e., beneficiaries and doctors, necessitating a review of the matter. It was accordingly considered by a Committee under the Chairmanship of AS&DG,CGHS. After careful review and keeping the recommendations of the Committee in mind, the following guidelines are issued to streamline the functioning of the Wellness Centres:
i. The medicines are to be issued as per the CGHS Formulary and guidelines issued by this Ministry in this behalf.
ii. In case the prescribed medicines are not available in CGHS formulary, but are essential for the treatment of the patient, they can be issued / indented by the doctors of the CGHS Wellness Centre on the basis of a valid prescription of the authorized specialist subject to the condition that such medicines are neither dietary supplements/ food items nor banned drugs. Instructions on this issue i.e., non-admissibility of food items etc. issued vide O.M .No. 39-3/2003-04/CGHS/MSD/RS dated 23rd July 2009 and 3rd August 2009 must be followed.
iii. In case of anti-cancer drugs and other life-saving drugs that are not approved by the DCG1 for use in India, each case should be considered by the Expert Committee under the Chairmanship of Special DG(DGHS).
iv. The technical Standing Committee constituted vide 2-2/2014/CGHS(HQ)/PPTY / CGHS(P) dated 27.08.2014 of this Ministry will review addition or deletion of drugs in the CGHS Formulary/ list of Treatment procedures / investigations / listed implants. The Technical Committee will meet once in three months or as per need, whichever is earlier. In the meantime reimbursement for unlisted procedures / implants will be made at the rates approved by AIIMS/GB Pant Hospital / actuals, whichever is less.
2. The O.M. of even number dated 25.08.2014 is superseded to the above extent while O.M. of even number dated 1.10.2014 is withdrawn.
Sd/-
(Bindu Tiwari)
Director, CGHS(P)
(Tel 2306 1831)
Posted by Confederation Of Central Government Employees at 1:14 PM No comments:

Subject : Alteration of date of birth of a Government Servant — reiteration of the instructions.
Rule 56 of Fundamental Rules states that except as otherwise provided in the rule, every Government servant will retire from service on the afternoon of the last day of the month in which he attains the age of sixty years.

Provided that a Government servant whose date of birth is the first of a month shall retire from service on the afternoon of the last day of the preceding month on attaining the age of sixty years.

3. The Supreme Court of India in Civil Appeal No.502 of 1993 — Union of India Vs. Harnam Singh — Judgement dated 9th February, 1993 had observed that :
“Inordinate and unexplained delay or laches on the part of the respondent to seek the necessary correction would in any case have justified the refusal of relief to him. His inaction for all this period of about thirty five years from the date of joining service, therefore precludes him from showing that the entry of his date of birth in service record was not correct”.
The observations of the Apex Court was also circulated to all Ministries and Departments of the Government of India vide OM No.19017/2/92-Estt.(A) dated 19-5-1993.

4. All the Ministries and Departments are requested to keep the above in view while processing cases of requests for changes of date of birth.

5. Hindi version follows.
sd/-
(B.Bandyopadhyay)
Under Secretary to the Government of India

Posted by Confederation Of Central Government Employees at 1:13 PM No comments:

Public Servants (Furnishing of Information and Annual Return of Assets and Liabilities and the Limits for Exemption of Assets in Filing Returns) Second Amendment Rules, 2014

CLICK HERE TO VIEW
Posted by Confederation Of Central Government Employees at 1:11 PM No comments:

NATIONAL CONVENTION OF PENSIONERS AT NAGPUR

BCPC ORGANISES A NATIONAL CONVENTION OF PENSIONERS ORGANISATIONS AT NAGPUR

Circular of BCPC Secretary General Comrade S.K.Vyas is reproduced below for information of all.

Dear Comrades,
Wish you Happy New Year 2015.
BCPC is organising a National Convention of Pensioners Organisations to be held on 15th February 2015 at Nagpur to finalize a Charter of Demands and decide a Programme of Action for realization of these demands.
The Convention has been called following the National Convention of Central Government Employees Organizations participating in the JCM held on 11.12.2014 which has finalized the following charter of Demands (some of which have been raised by C.G. Pensioners Organizations as well) and have decided to go ahead with agitational programme of action culminating in an indefinite strike, if the Government does not settle these demands.

Declaration adopted by the said National Convention is reproduced in NCCPA website (www.nccpahq.blogspot.in) and may be down loaded. However, the Charter of Demands & Programme of Action adopted by the said National Convention are reproduced below:-
Charter of demands.
1.      Effect wage revision of Central Government employees from 1.12014 accepting the memorandum of the staff side JCM; ensure 5-year wage revision in future; grant interim relief and merger of 100% of DA. Ensure submission of the 7th CPC report with the stipulated time frame
of 18 months; include Grameen Dak Sewaks within the ambit of the 7th CPC.  Settle all anomalies of the 6th CPC.
2.      No privatisation, PPP or FDI in Railways and Defence Establishments and no corporatisation of postal services;
3.      No Ban on recruitment/creation of post.
4.      Scrap PFRDA Act and re-introduce the defined benefit statutory pension scheme.
5.      No outsourcing; contractorisation, privatisation of governmental functions; withdraw the proposed move to close down the Printing Presses; the Publication, Form Store and Stationery department and Medical Stores Depots; regularise the existing daily rated/casual and contract workers and absorption of trained apprentices;
6.      Revive the JCM functioning at all levels as an effective negotiating forum for settlement of the demands of the CGEs.
7.      Remove the arbitrary ceiling on compassionate appointments.
8.      No labour reforms which are inimical to the interest of the workers.
9.      Remove the Bonus ceiling;
10.     Ensure five promotions in the service career.

PROGRAMME OF ACTION:
1.      Organize State/District/Divisional level Joint convention to popularize the declaration before and 4 February, 2015.

2.      To organize massive dharna/rally at all State Capital/major Defence centers jointly by all the participating Unions in March, 2015.

3.      To organize campaign fortnight throughout the country in the first two weeks of April, 2015.

4.      To organize Rally before the Parliament house in the month of April when the house will be in budget session to declare the date for the commencement of the indefinite strike action and the programme and
date of serving strike notice.
You are requested to take organizational decision to join this convention to be held at Nagpur on 15th February 2015.

Please inform me about the decision taken by your Organization as also the list of delegates who would be attending this convention, latest by 15th January 2015.

Expecting a prompt response from you 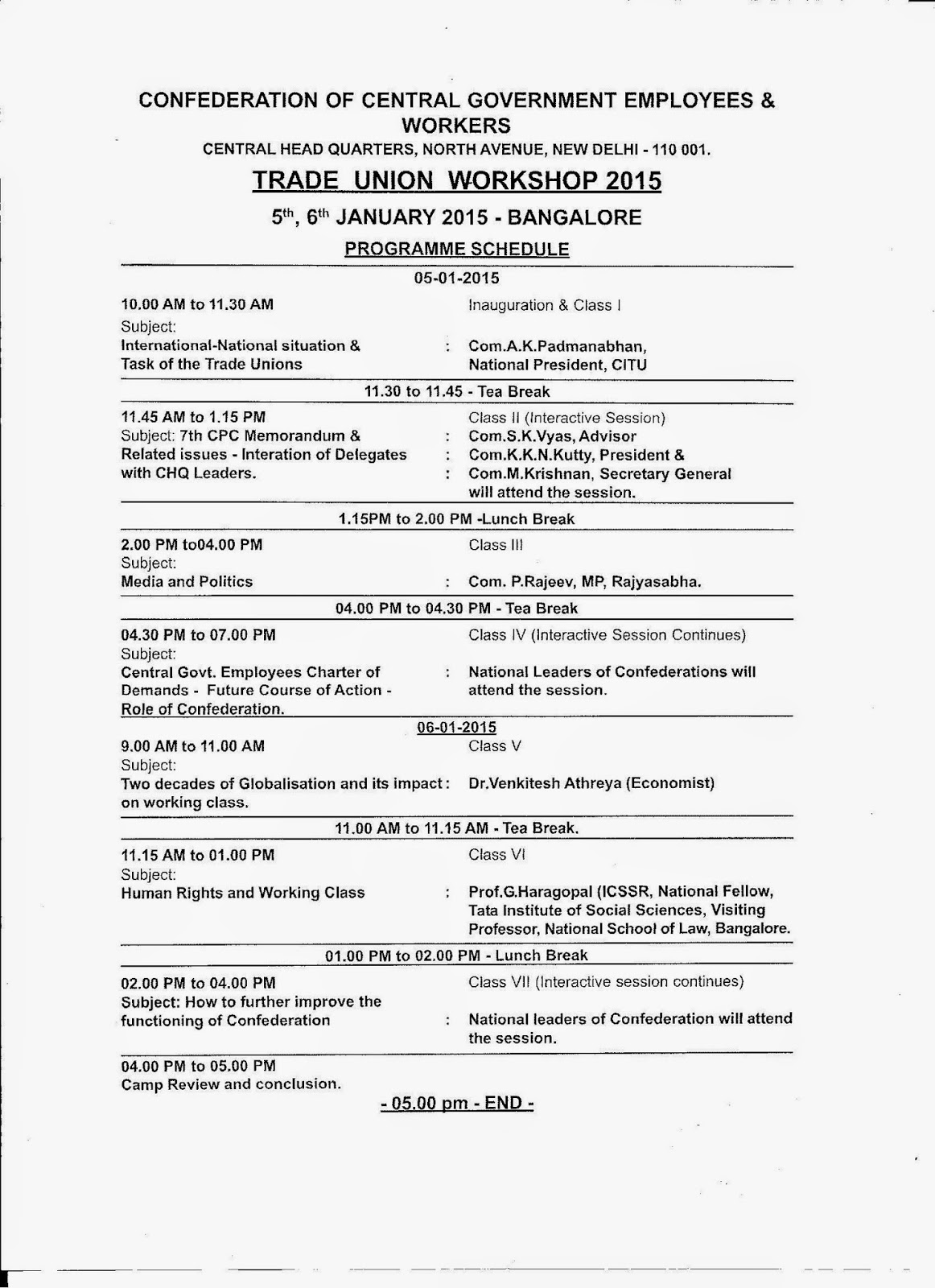 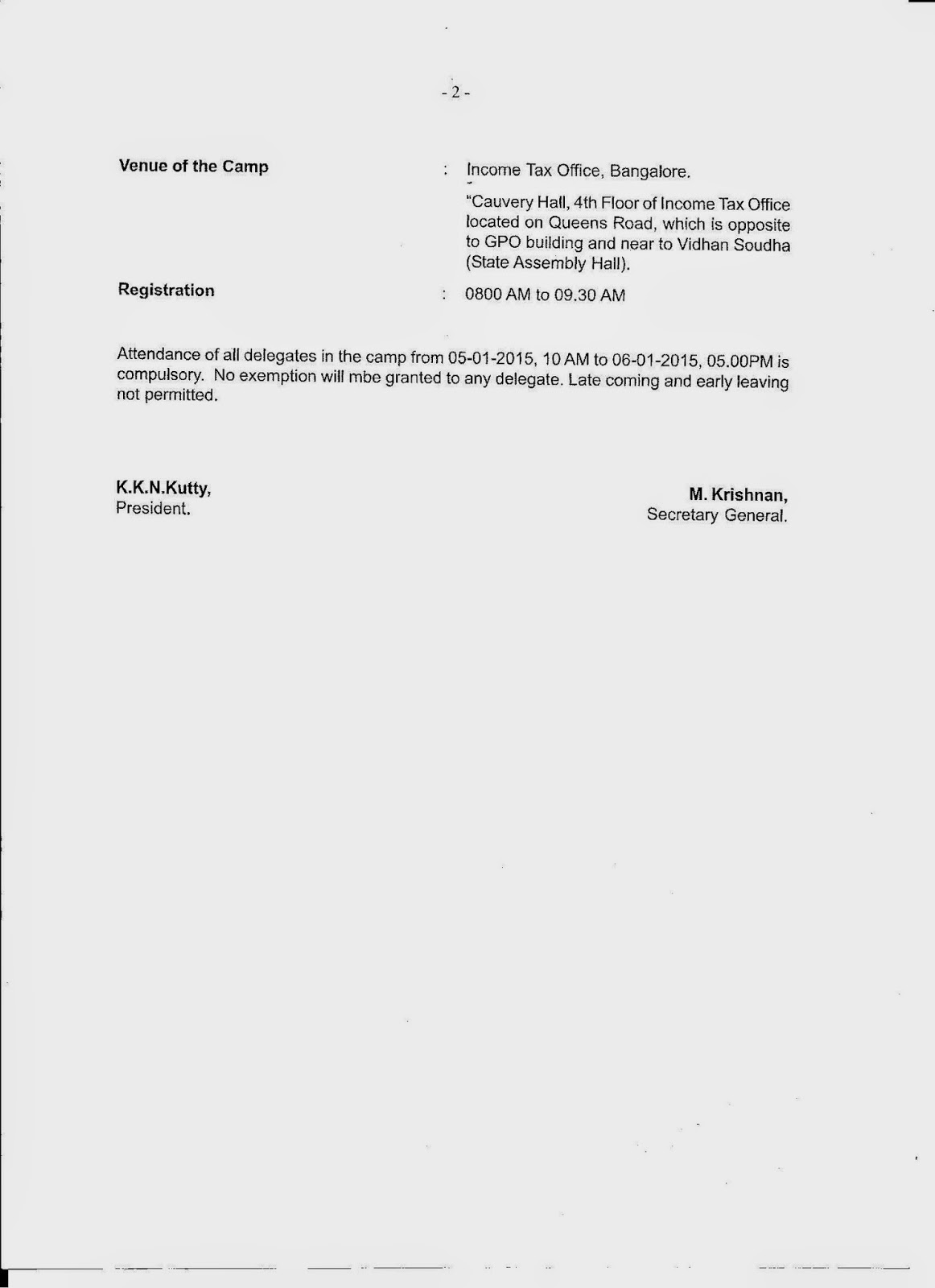 Posted by Confederation Of Central Government Employees at 4:15 PM No comments:

REPORT OF WORKING GROUP CONSTITUTED TO DELIBERATE ON RECOMMENDATIONS IN THE EXPERT COMMITTEE REPORT OF SSC.
CLICK HERE to view

Declaration of Assets and Liabilities by Public servants under section 44 of the Lokpal and Lokayuktas Act, 2013 - extension of last date for filing of revised returns by public servants (Click the link below for details)


http://ccis.nic.in/WriteReadData/CircularPortal/D2/D02ser/lokpalassets.pdf
Posted by Confederation Of Central Government Employees at 3:54 PM No comments: 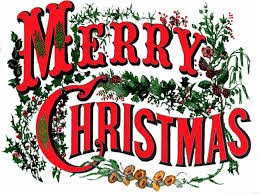 Posted by Confederation Of Central Government Employees at 2:47 PM No comments:

CLICK HERE
Posted by Confederation Of Central Government Employees at 7:17 PM No comments:

To
1.All CHQ Office Bearers of Confederation
2. All State Secretaries of C-O-Cs

It is  hereby notified that a meeting of the available Secretariat members and State Secretaries of the C-O-Cs of Confederation of Central Government Employees& Workers will be held at 6 PM on 05.01.2015 at Bangalore.

1. Implementation of the decisions of the National Joint Council of Action of Central Government Employees Organisations participating in JCM and related issues.
2. Any other items with permission of the Chair.

Posted by Confederation Of Central Government Employees at 10:15 PM No comments:

CLICK HERE to view
Posted by Confederation Of Central Government Employees at 5:13 PM No comments:

Photos of the convention are published below. 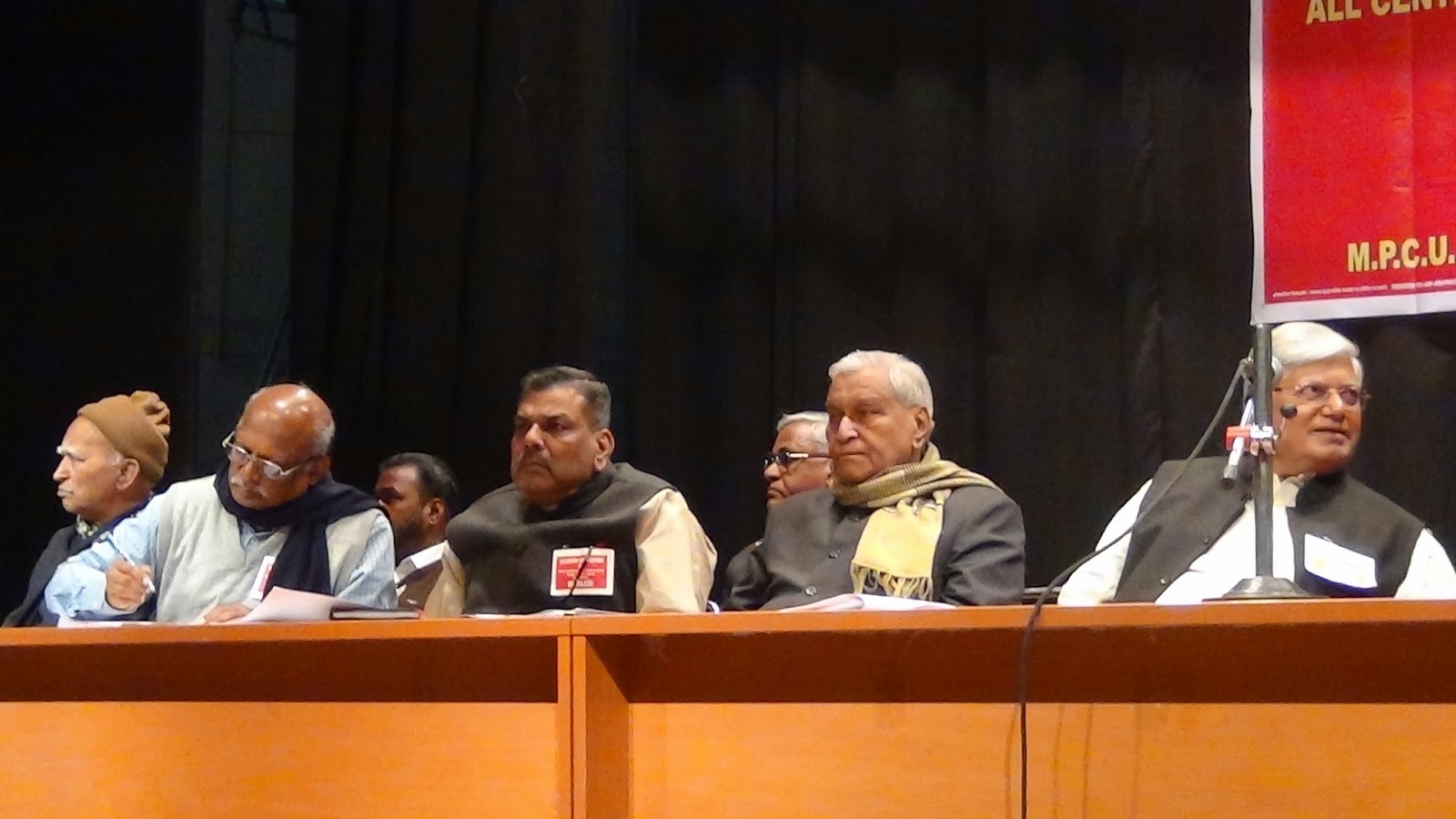 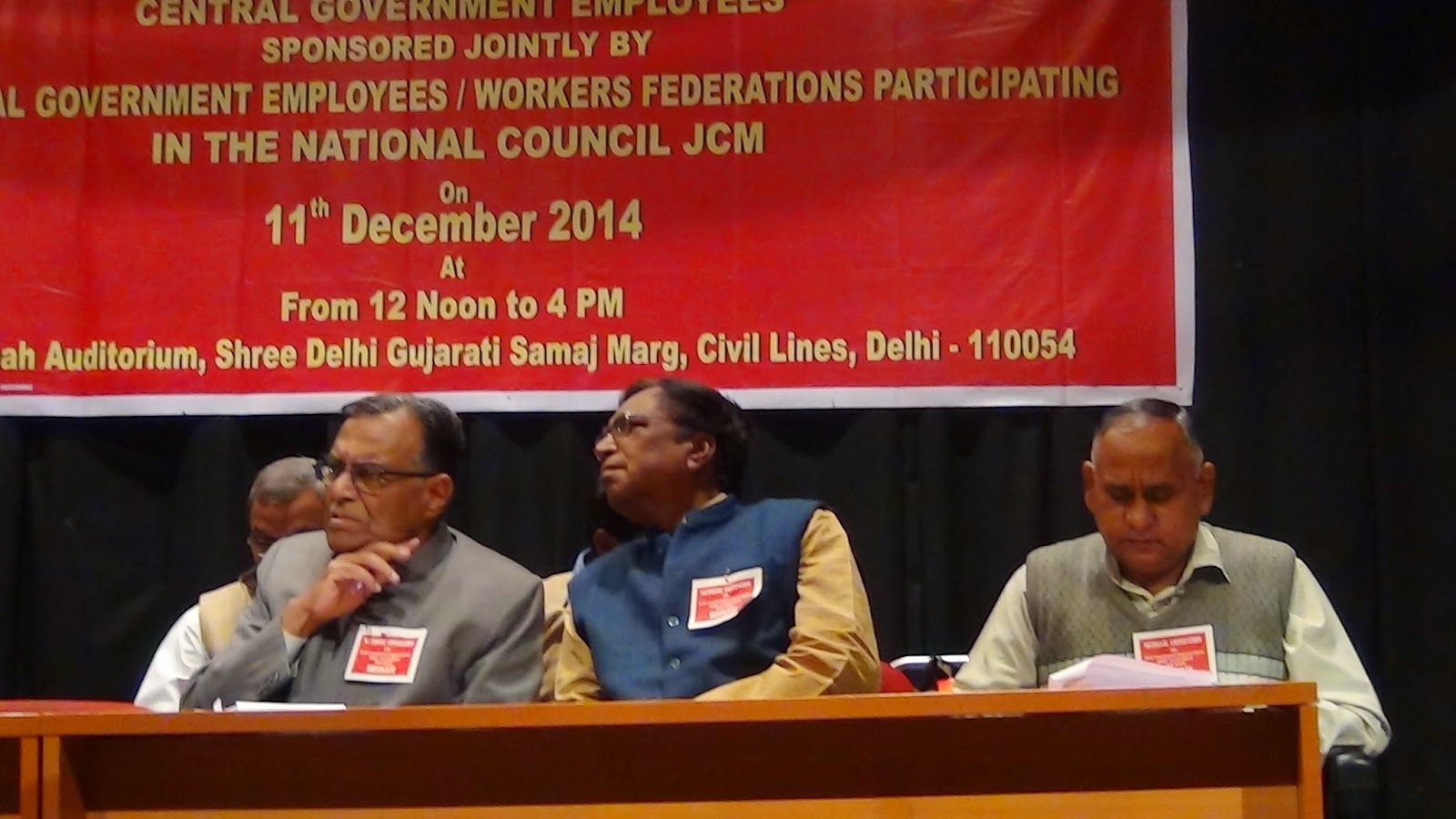 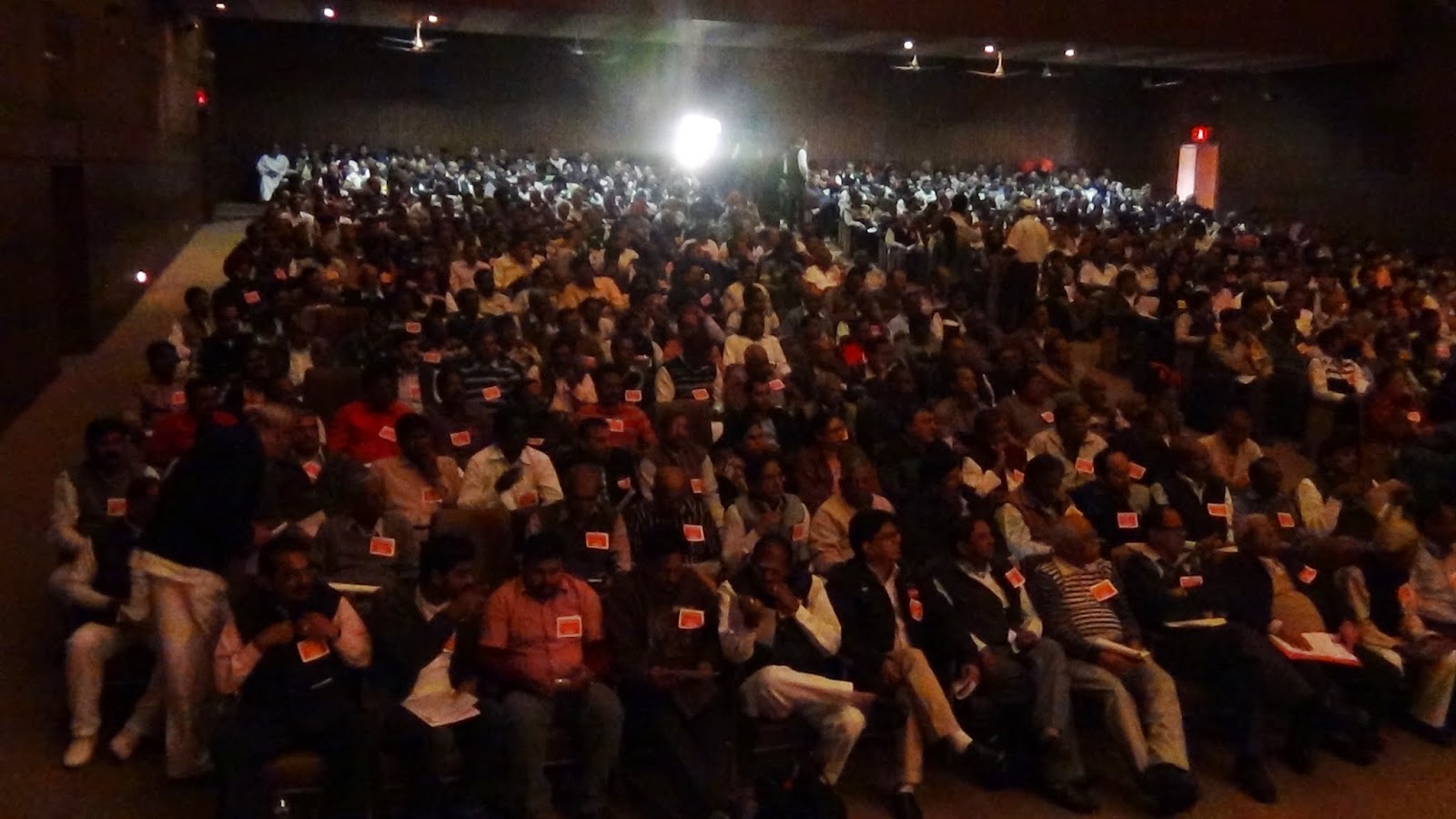 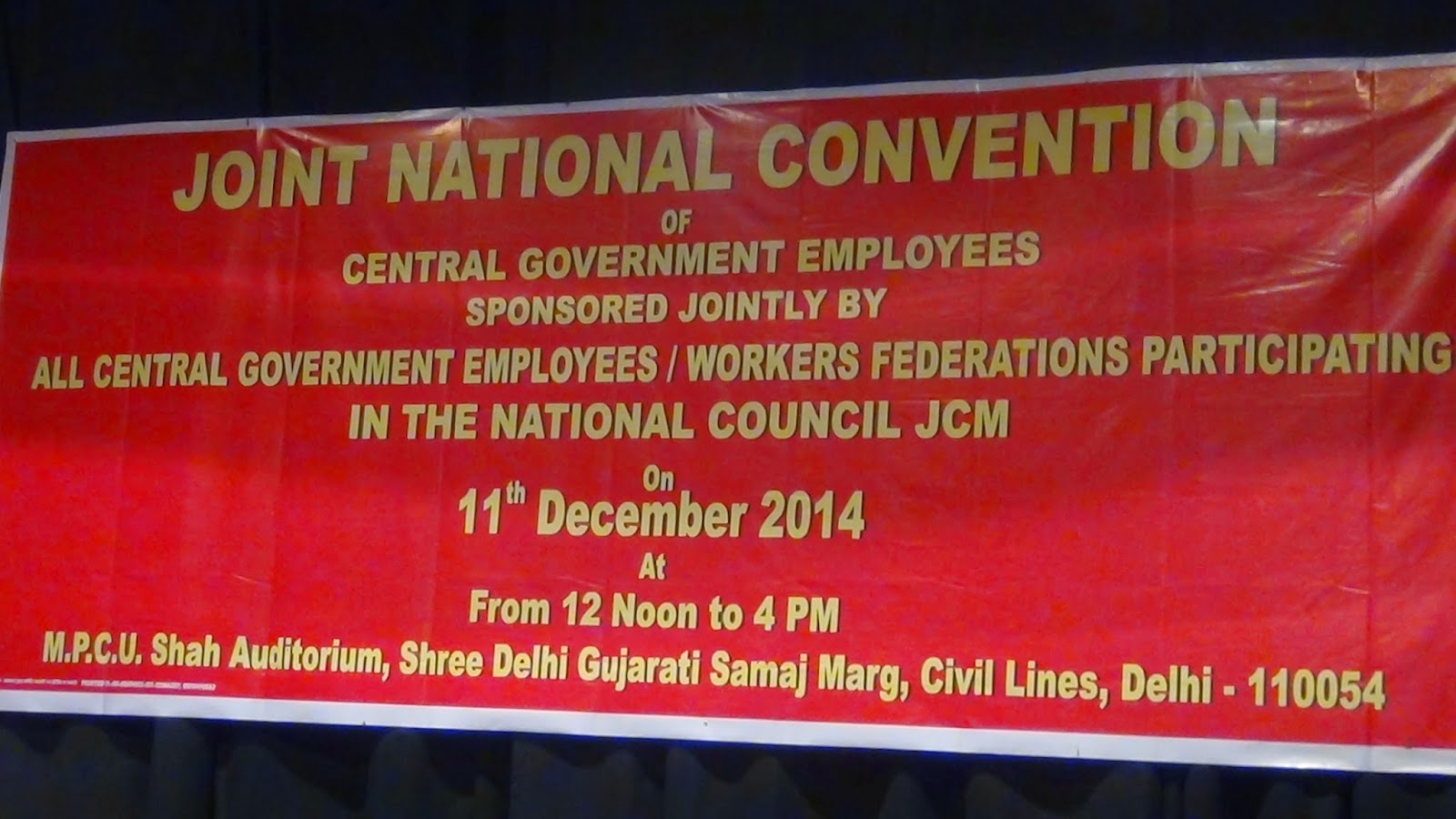 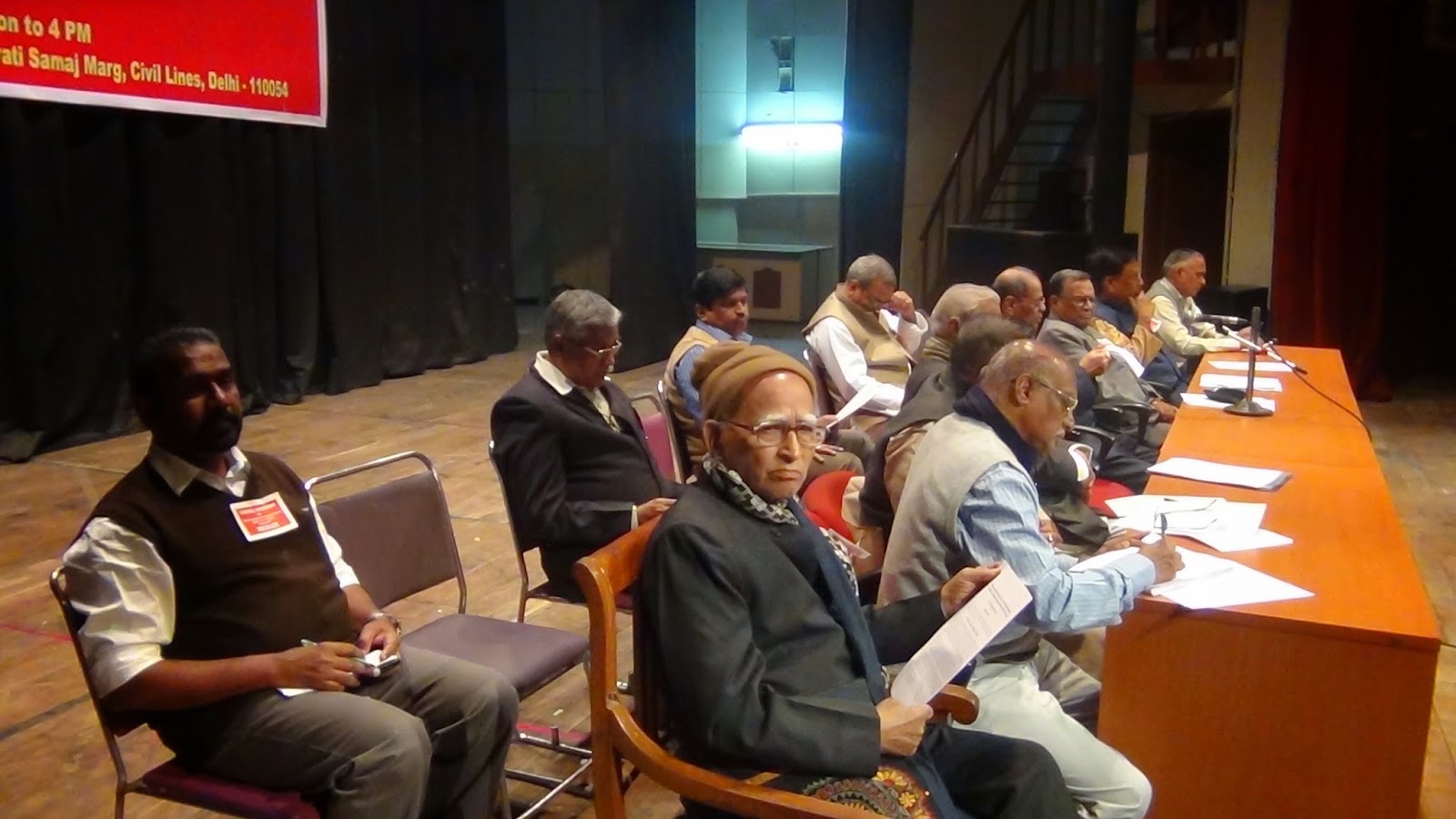 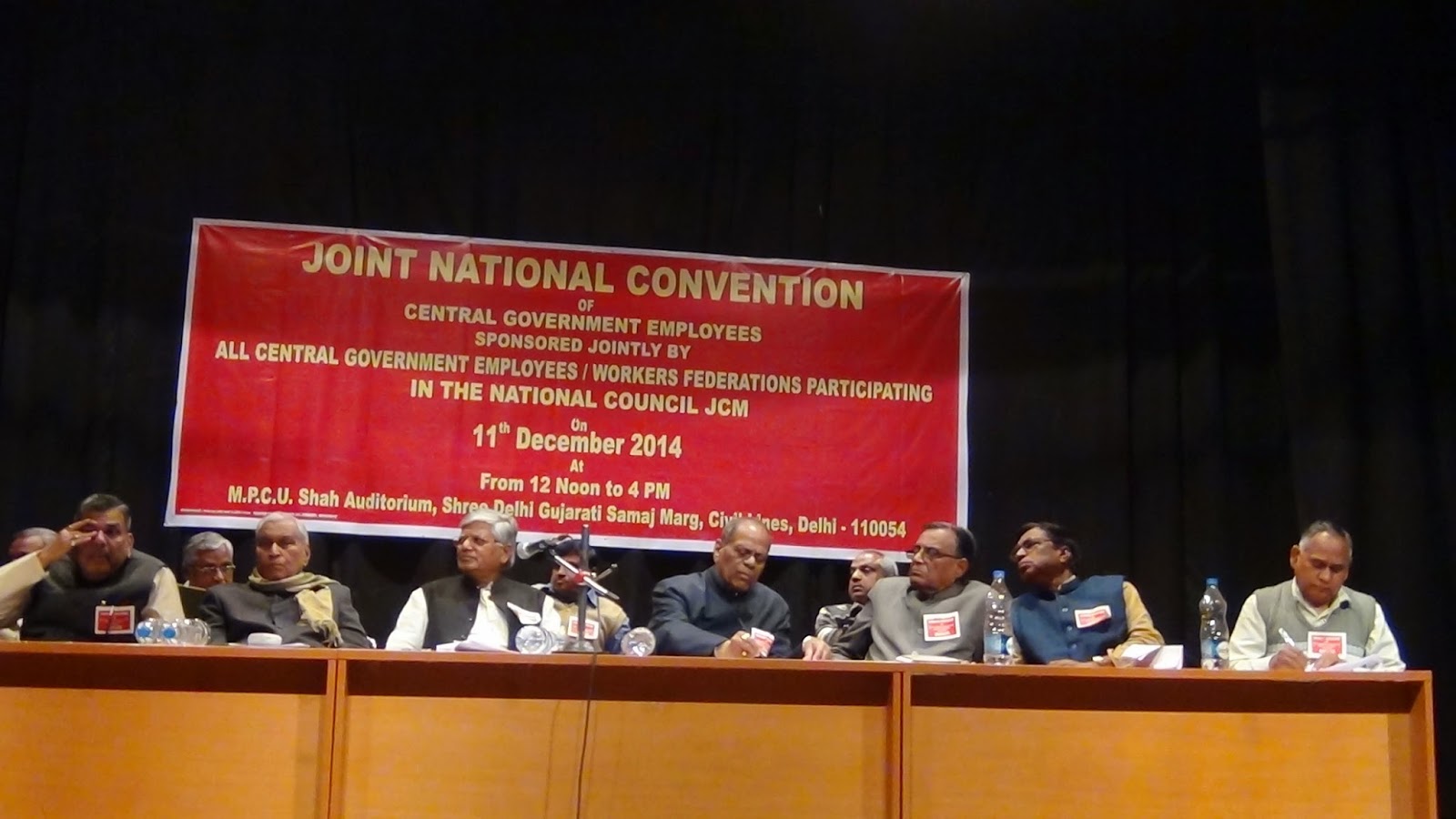 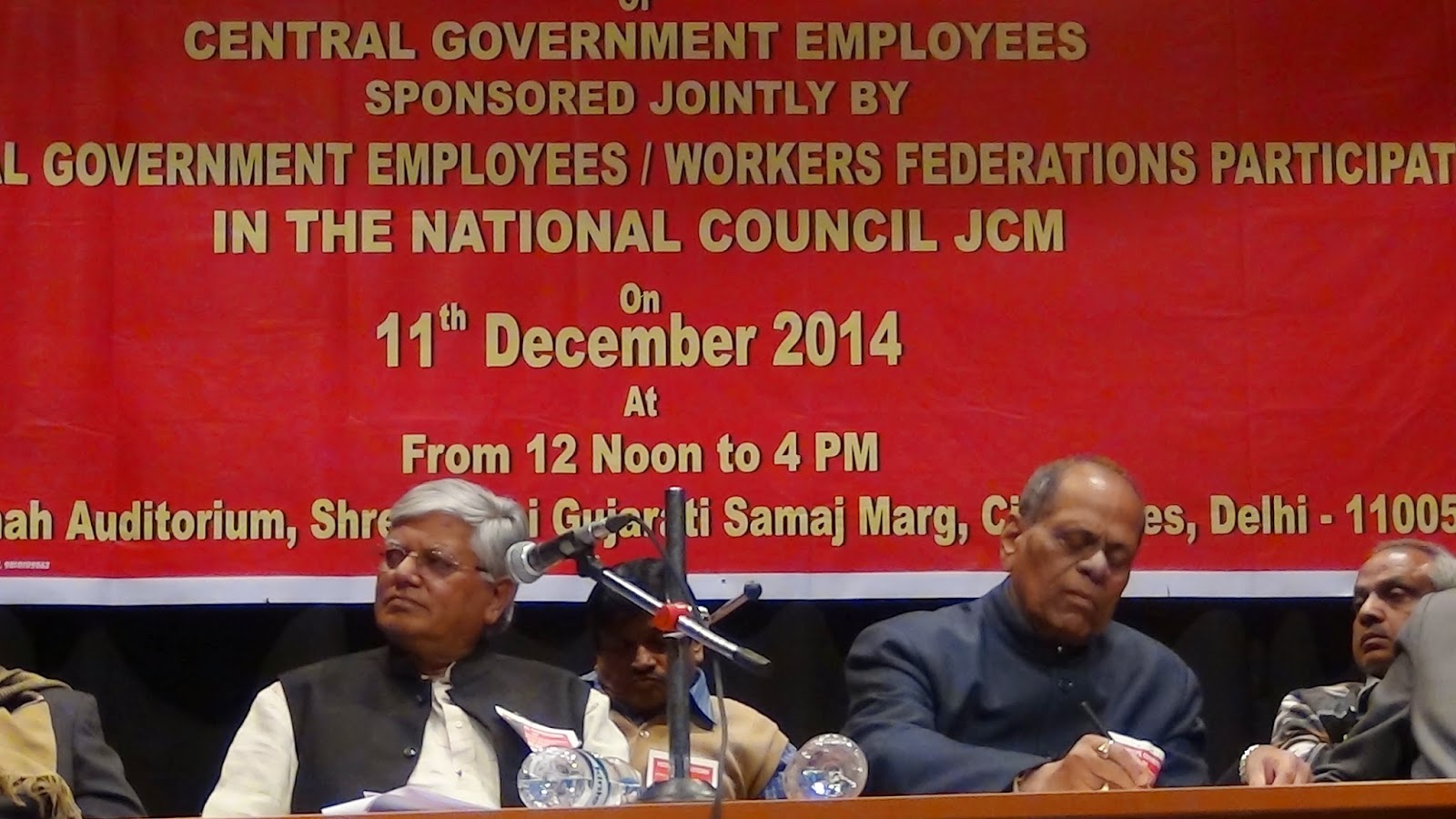 Posted by Confederation Of Central Government Employees at 11:12 AM No comments: