The annual consultative meeting of the TUIs (Trade Union Internationals) of the World Federation of Trade Unions (WFTU) was held in Kolkata on 9-10 October 2017. This annual meetings, which are being held in WFTU headquarters in Athens, was held outside for the first time. George Mavrikos, general secretary of WFTU, Swadesh Dev Roye, deputy general secretary of WFTU and international general coordinator of TUIs, and also national secretary of CITU, H Mahadevan, deputy general secretary of WFTU and its in-charge of Asia Pacific region attended this meeting. Leaders of 9 out of the total 10 TUIs from all over the world participated. The leadership of the central trade unions of India affiliated to WFTU also participated in the meeting and greeted the delegates.


Hemalata, president of CITU welcomed the gathering. The key note address was delivered by George Mavrikos. Swadesh Dev Roye presented the background paper explaining the role of the TUIs in strengthening class oriented trade union movement at the global level and the need to develop effective functioning and better coordination among the different national unions affiliated to the various TUIs. Mahadevan made an intervention explaining the status and functioning of the TUIs as per the WFTU constitution.


48 delegates participated in the discussion that followed. While supporting the formulations made in the speeches by the WFTU general secretary and the TUI in charge, they spoke on the conditions of workers in their sectors. They welcomed the CITU’s initiative to organise the two day meeting which enabled detailed discussions on the issues.


Mavrikos concluded the discussion and emphasised the need for ideological development of the workers exposing the barbaric nature of imperialism and capitalism. He reiterated the need to pay attention to organise the migrants and address the issues of the refugees.


The meeting unanimously adopted the ‘KOLKATA (INDIA) CONCLUSIONS’, introduced by Dev Roye, which outlined the tasks to be undertaken in the next year.


A well attended trade union activists meeting was held in the University Institute Hall in the evening of 10 October which was addressed by George Mavrikos and Tapan Sen, general secretary of CITU. Swadesh Dev Roye presided over the meeting and Pradip Biswas, general secretary of BEFI presented the vote of thanks.

KOLKATA (INDIA) CONCLUSION
This WFTU – TUI annual consultation meeting is being held around one year after the 17th World Trade Union Congress in Durban, South Africa and around five months after the meeting of the Presidential Council of WFTU in Havana, Cuba. It is being held in a situation when the systemic capitalist crisis is deepening and the capitalist class continues its attempt to protect and increase their profits by shifting the burdens of the crisis on to the working class and other sections of the toiling people. All the hard won rights and benefits of the working class are under attack.


This onslaught has to be fought nationally and internationally. TUIs have a big responsibility in leading this fight. They have to develop and strengthen sectoral and coordinated movements in their respective sectors throughout the world under the guidance and with the support of the WFTU.


The ideology of the WFTU, the understanding of the 17th Congress of the WFTU about the world situation and the role of the class oriented trade unions have to be taken to the grass root level workers in our respective sectors.


TUIs are major bodies of class oriented trade union movement. They have the fundamental responsibility of defending the rights of the workers in their respective sectors including the trade union rights, of linking the workplace with the WFTU.


To ensure this, we have to take up the following tasks:


·         All TUIs to meet regularly, discuss the developments in their industries, the conditions of the workers in their industries and their struggles in various countries at the global level. Mechanism for regular sharing of information among all affiliated unions across the globe to be evolved and effectively implemented.


·         Support the struggles of workers in their industries across the world, plan solidarity actions and implement them; inform WFTU Secretariat about these struggles for broader support and solidarity


·         The 150th year of publication of ‘Das Capital’ to be observed to spread awareness about the inherent exploitative nature of the capitalist system and raise the consciousness of the workers on the need to change the system and the role of the working class in ending exploitation.


·         TUI affiliates are to take up the day to day problems of workers, analyse objectively from working class angle the cause of problems and organise struggle to fulfil the demands of the workers.


·         TUIs to work for developing unity with the farmers, students and self employed people.


·         TUIs have the task of promoting international solidarity with workers from other sectors and countries.


·         TUIs must pay attention to the diabolical developments of political refugees and economic migrants facing inhuman atrocities internationally which is directly linked to barbarity of imperialism and capitalist crisis.


·         To undertake study at regular intervals to trace down the development in industries with facts and figures with a view to educate the cadres and masses internationally and send the reports to WFTU Secretariat.


·         To establish co-ordination between the Regional Offices and TUIs in each Regions, so as to help each other and the implementation of collective programmes.


·         TUIs must continuously promote the WFTU amongst the grass root level workers and unions and bring them into the WFTU family. This should be an important parameter to judge the organizational success of all the TUIs.


·         TUIs must democratically elect leaders in their Congress ensuring that the new cadres and leaders are active and effective in discharging the responsibility of the office they hold in the respective TUI. 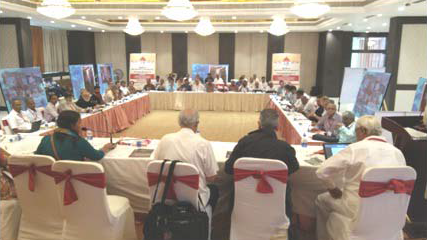 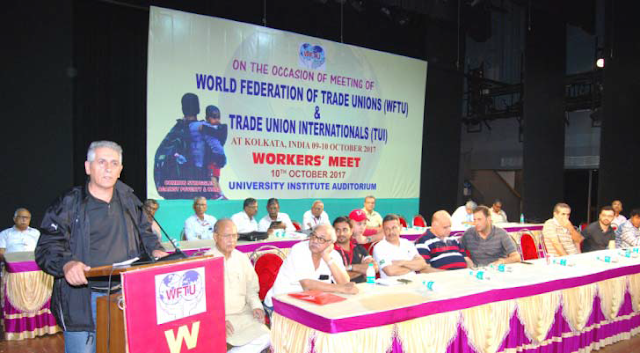 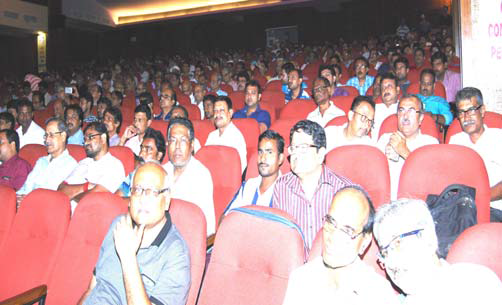 Posted by Confederation Of Central Government Employees at 3:48 PM No comments: 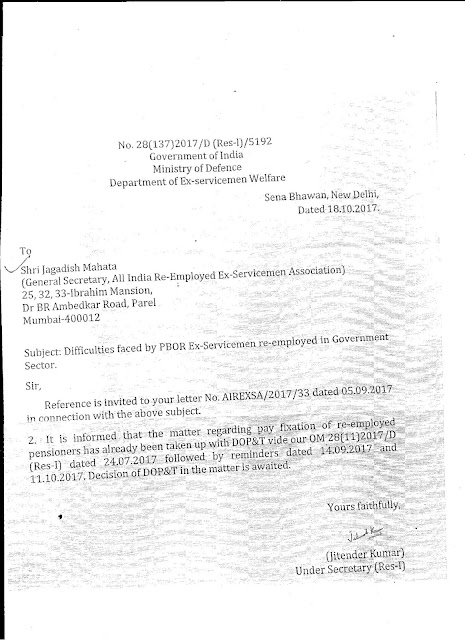 Posted by Confederation Of Central Government Employees at 3:13 PM No comments:


http://dea.gov.in/sites/default/files/GPF%20Resolution%20Oct%202017.pdf
Posted by Confederation Of Central Government Employees at 12:38 PM No comments: 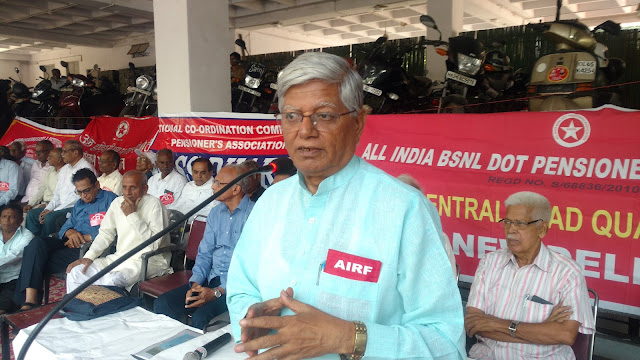 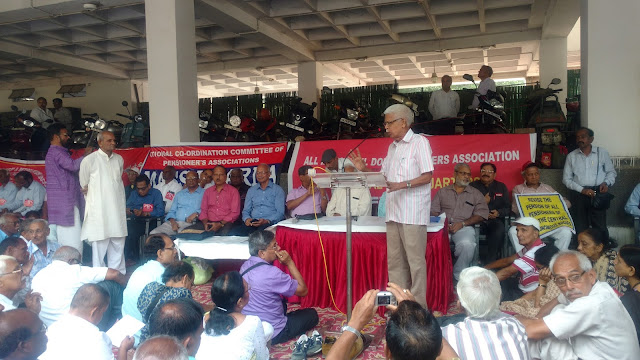 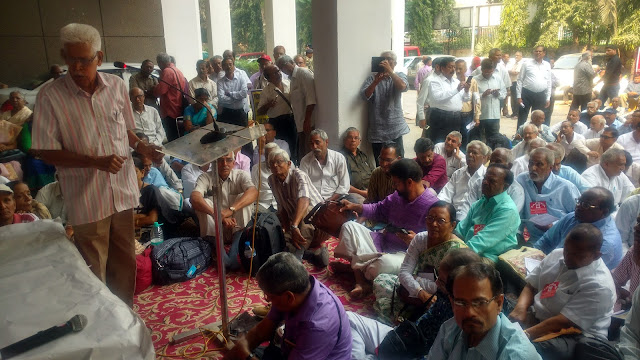 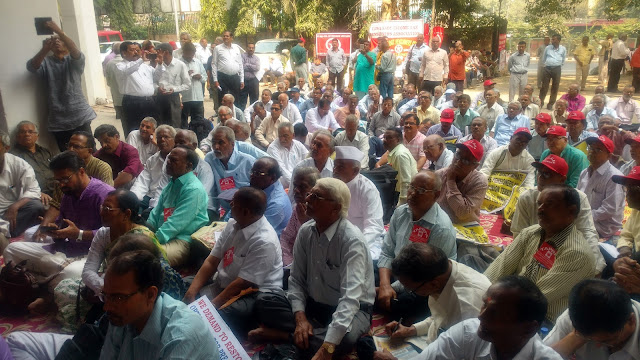 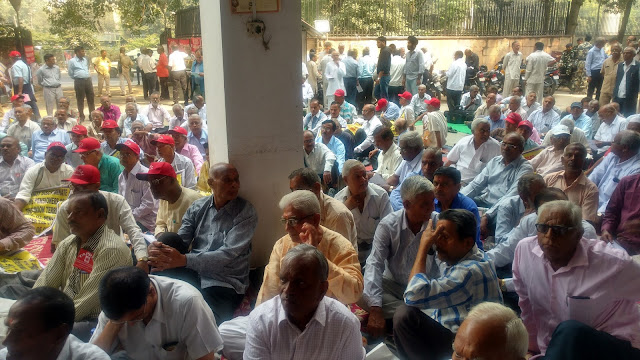 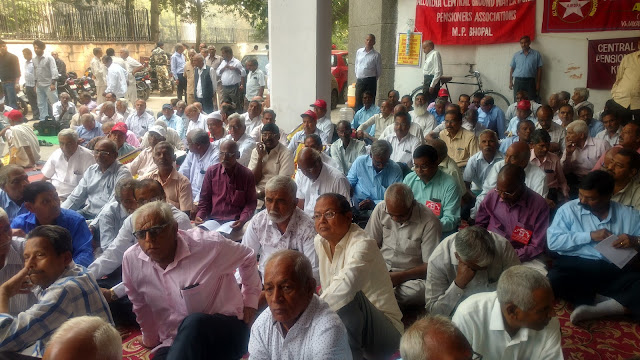 Posted by Confederation Of Central Government Employees at 12:55 PM No comments:

1. By Beneficiary Login – When beneficiary has registered as well as new mobile number.

Case - I: Steps to update mobile number by Beneficiary Login:

Step 2: Enter the beneficiary id of any of the family members and the password in the screen shown above

If a beneficiary doesn’t have the password, click on the option ‘Generate Password’The following screen will appear:-

Enter the beneficiary id of main card holder, date of birth and mobile no. that exists in the CGHS database and click on Register button.
OTP is sent to the registered mobile no. 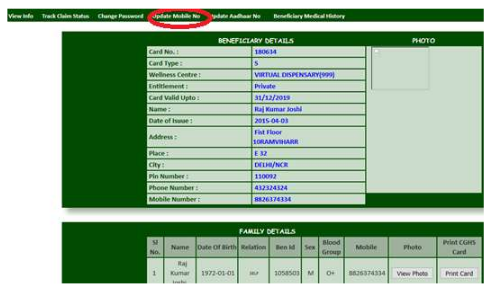 Step 4: The desired screen is displayed for updating the mobile no

Posted by Confederation Of Central Government Employees at 3:38 PM No comments:

BRIEF OF THE MEETING HELD ON 24.10.2017 WITH THE CABINET SECRETARY (GOVERNMENT OF INDIA) 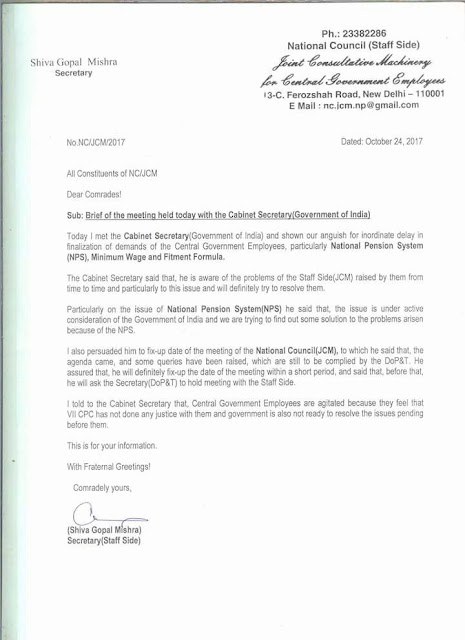 Posted by Confederation Of Central Government Employees at 12:57 PM No comments:

IMPLEMENTATION OF GOVERNMENT'S DECISION ON THE RECOMMENDATIONS OF THE SEVENTH PAY COMMISSION - REVISION OF RATE OF TRAINING ALLOWANCE. (Click the link below to view)
http://dopt.gov.in/sites/default/files/Training%20allowance0001.pdf
*****************************
Posted by Confederation Of Central Government Employees at 12:09 PM No comments: 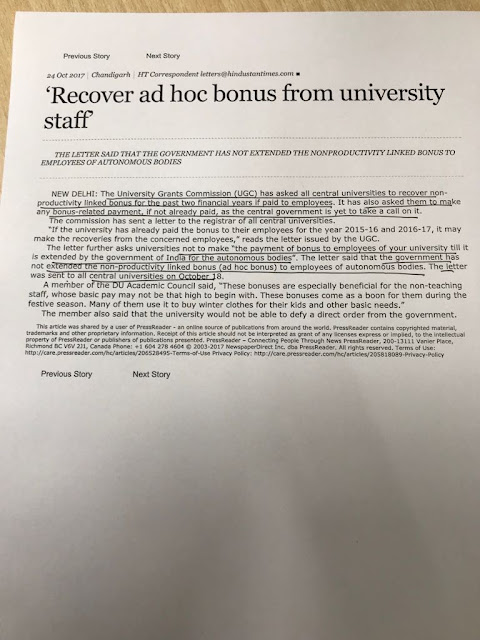 Posted by Confederation Of Central Government Employees at 1:41 PM No comments:

More than 150 (One Hundred Fifty) Delegates from different parts of the country had participated in the above Conferences and Notional Convention women’s.

Apart from them, many other leaders and intellectuals had participated and addressed various sessions of the conferences and women convention.

After three days marathon deliberations, the conferences and the women’s convention have taken various decisions.

The conferences endorsed the decision of nine Central Trade Unions of the Country and other Independent Federations to organize a “Maha Dharna” in Delhi from 9th to 11th November, 2017 in protest against the anti-people, anti-working class policies of Modi Government and in support of the twelve Point Charter of Demands of the working class. The conferences called upon the members to participate in Dharna in largest possible numbers and prepare for the proposed indefinite strike by working class in 2018.

The conference deplored the anti-employee, indifferent and vindictive approach of the Controller General of Accounts and some of his officers.

In protest of not following the Government of India Rules, not conducting cadre review of Group B&C Cadres for last forty years, non-grant of recognition to officers and employees Associations like AIAPAO (Civil) and AICAEA Cat-II, Non-extension of facilities to the employees Associations applicable in terms of JCM Scheme and non-conducting of Departmental promotion examination etc., the  conferences adopted large number of Resolutions protesting the above actions of the Controller General of Accounts. The conferences have further decided that, Civil Accounts Employees and officers from all over the country shall participate in a 48 (forty eight) hours continuous Dharna in front of the office of Controller General of Accounts, New Delhi from 7th to 8th December, 2017 and even after that, if no-settlement is there, the Civil Accounts Employees and officers shall resort to a day’s token  strike on 15th March, 2018.

The 7th National Convention of National Women’s Sub-Committee has elected Smti. Laxmi Swaminathan and Smti. B. Dalui as Chairperson and Convener respectively. 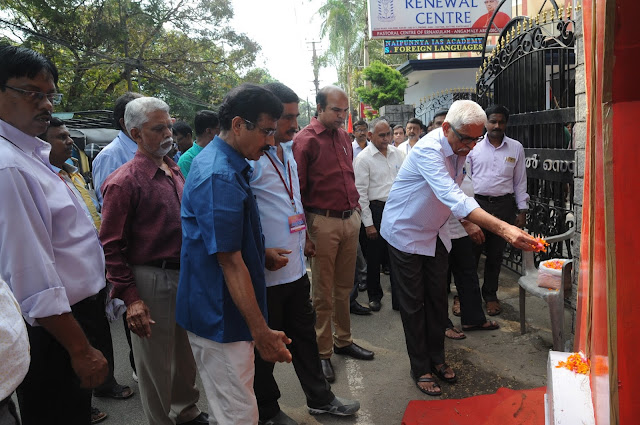 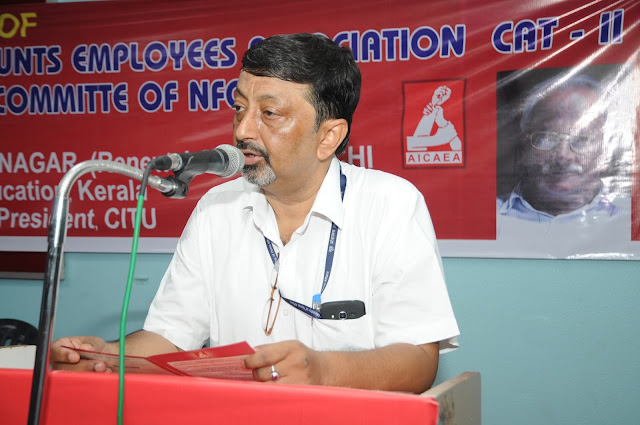 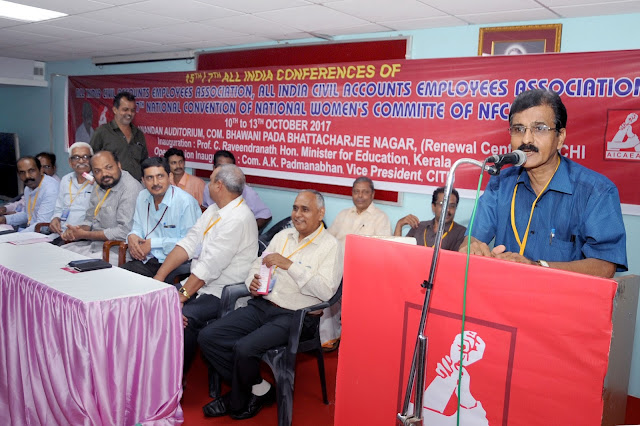 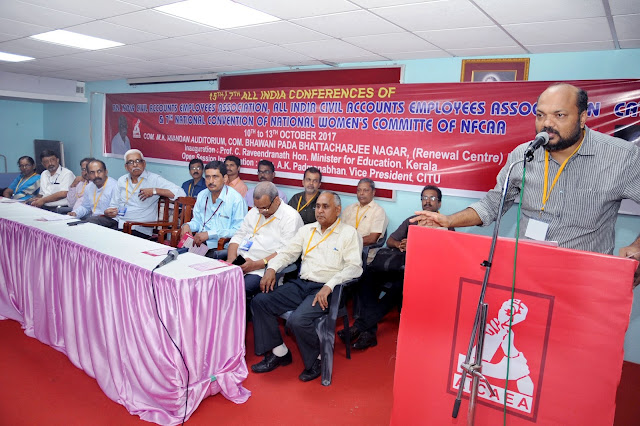 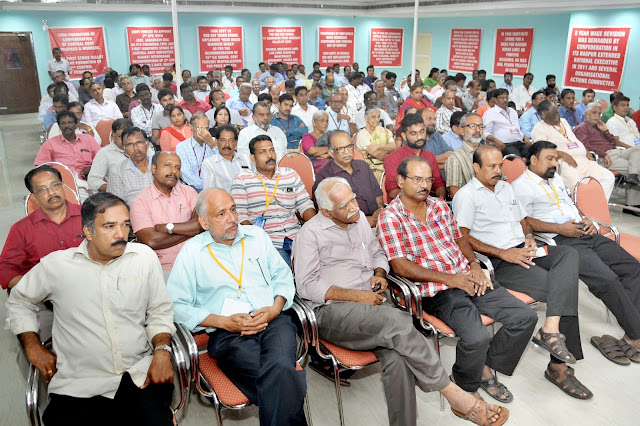 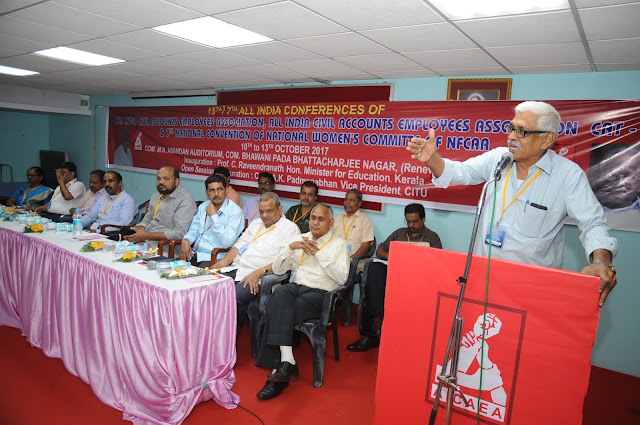 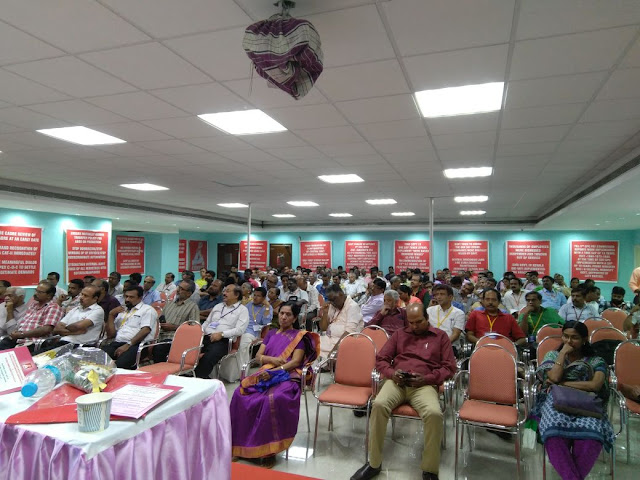 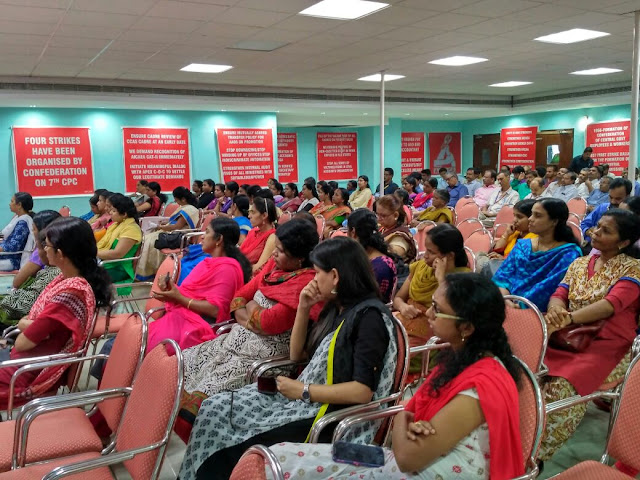 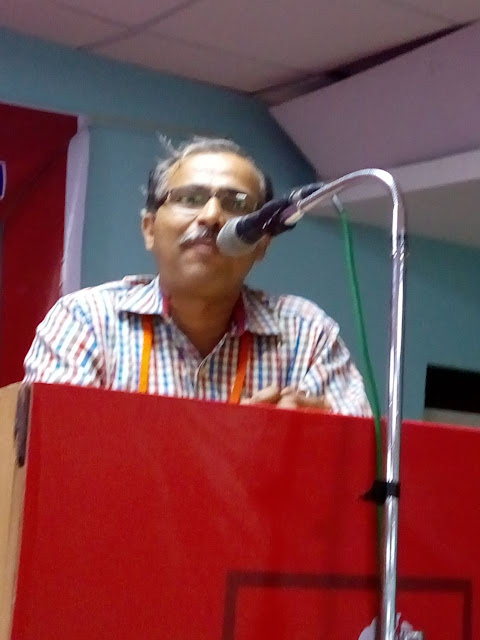 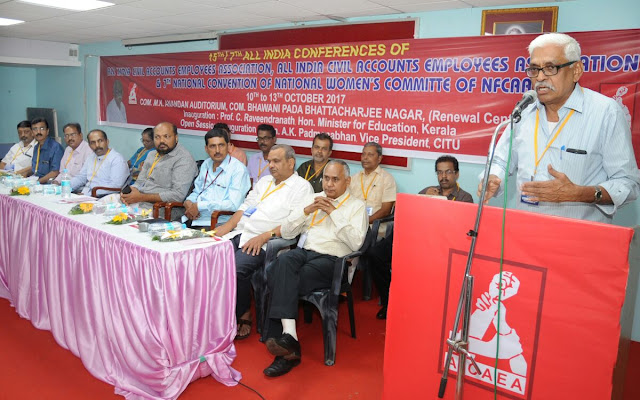 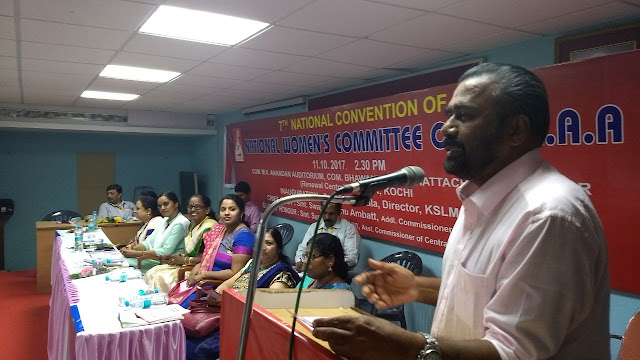 Posted by Confederation Of Central Government Employees at 12:42 PM No comments: