You are aware, the united platform of trade unions has jointly prepared a “Workers Charter” based on the burning demands of the workers and the society as a whole to be adopted from the National Convention of Trade Unions and sent to all the political parties urging them to commit and adopt the demands of the workers in their election manifesto. The same charter should also be utilized in the campaign by the trade union movement in the forthcoming electoral battle for ouster of the BJP Govt.

The matter was discussed in detail in the extended secretariat meeting of CITU held on 6-7 February 2019 where the representatives of all the state committees of CITU were present.

The joint workers charter in totality voices the demand for reversing the neoliberal policy regime and adopting a pro-people alternative policy on the issues of the workers and people in general.

The National Convention of Trade Unions are going to be held in the Constitution Club Annexe, Rafi Marg, New Delhi (within the campus of Mavalankar Hall ). The convention will commence at 1.30 pm on 5th March 2019.

All the state Committees and federations are requested to take urgent initiative to mobilize in the National convention as per quota. 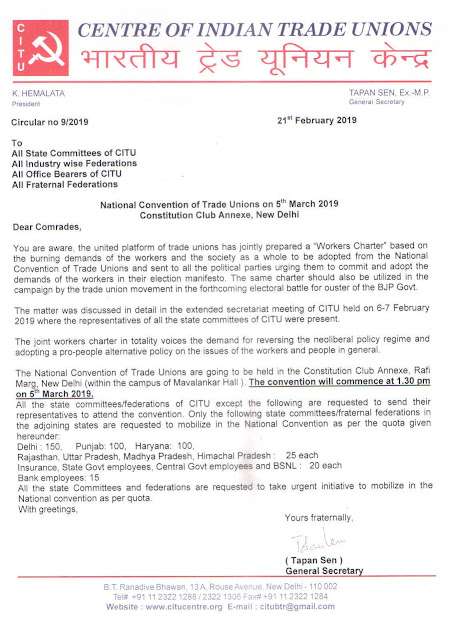 Posted by Confederation Of Central Government Employees at 10:28 AM