The two days’ Annual Conference of the Non-Gazetted Govt. Officers’ Association, Andaman and Nicobar Islands began with its inaugural session at Kerala Samajam, Port Blair on 15.04.2017. Shri R.N.Parashar, Assistant Secretary(HQ.), Confederation of Central Govt. Employees & Workers, New Delhi inaugurated the Conference. Speaking on the occasion, Shri Parashar, criticized the anti-employee policies of the present government downsizing the government sector day by day. He discussed in length about the minimum wage and its calculation, formation of JCM National Council and the role of Confederation to bring various employees’ organisation and associations under one single umbrella. Referring to the New Pension Scheme, Shri Parashar expressed serious concern over the fate of the employees who entered the service after 31.12.2003 as there is no assurance from the government that the 10% of the salary deducted from these employees will be paid to them when they retire from service. He urged the new generation to be united in the fight against the upcoming issues before the central government employees due to the government’s negative attitude. Shri R.N.Parashar also mentioned about the next phase of ongoing agitation by the Central Govt. Employees & Workers. On 23.05.2017 thousands of government employees & workers will hold Mass Dharna in front of Finance Minister’s Office at New Delhi.

Earlier, welcoming the gathering, Shri Esupadam, Retd. Deputy Secretary, who is the Chairman, Reception Committee enlightened about the glorious history of the NGOs’ Association and the struggles made by the leaders like Com. PKS Prasad for the benefits being enjoyed by the employees of these islands at present. Shri K.G.Das, Former General Secretary; Shri B.Chandrachoodan, General Secretary, CITU; Shri D.Ayyappan, General Secretary, A & N Gazetted Govt. Officers’ Association; Shri S.P.Kalairajan, Circle Secretary, BSNLEU and Shri Anadi Bhattachajee, Divisional Secretary, P-IV, AIPEU also spoke on the ocassion. A small cultural programme was also presented by children in the beginning. Shri S.Surender, Vice Chairman, Reception Committee expressed vote of thanks. The conference shall continue on tomorrow (16.04.2017) with the delegate session being participated by the delegates and observers from various branches and sub-committees of the Association from Campbell Bay to Diglipur.
DAY-2 (Delegate Session)
The Delegate Session of the Annual Conference of the Non-Gazetted Government Officers’ Association was held on 16.04.2017 at Kerala Samajam Hall, Port Blair. In his presidential address, Shri P.Sathyapal, President of the Association expressed his concern over the upcoming issues in the society which is becoming a threat to the democratic setup of the country. He remembered the valiant struggles of the leaders to achieve the demands of the central government employees and urged upon the new generation to participate in the fight against the upcoming challenges in service carrer of govt. employees.  The Delegate Session, at the outset, paid homage to the memory of trade union leaders and other government employees, who passed away during the period since last Conference in April, 2016. Thereafter, Shri. T.S.Sreekumar, General Secretary presented the working report of the Association for last year while Shri D.S.Clement Stephen, Finance Secretary of the Association presented the Audited Accounts. General Secretary’s report contained an overview of the international, national, local situations and details of the programmes conducted by the Association during the intervening period. Delegates from various Branches and Sub-Committees actively participated in the discussion on the General Secretary’s Report and Audited Accounts which were later on adopted unanimously. The draft resolutions on various issues and problems affecting the government employees were presented in the meetings which were adopted after addition of various other issues made by the delegates during the discussion. About 130 delegates and observers from various outstations and Port Blair/South Andaman, representing thousands of employees, attended the Delegate Session. A presidium comprising Shri N.K.Paul, Shri P.Sathyapal and T.S.Premlatha conducted the proceedings of the Delegate Session.
Addressing the Delegate Session, Shri R.N.Parashar, Assistant Secretary, Confederation of Central Govt. Employees & Workers, New Delhi expressed serious apprehension towards the indifferent attitude of the central government playing delaying tactics in acceding to the genuine demands raised by them. He urged upon the women and other employees to come forward in large numbers to participate in the programmes conducted by the Association. He also replied to the queries raised by the delegates and observes present in the Conference which covered various issues like NPS, MACP, Pay upgradation, CCL etc. Shri N.K.Paul, Shri K.P.Paul and Shri S.R.Mridha, former senior leaders of the Association were felicitated in the Conference. Shri R.Raji, Secretary, Reception Committee, proposed the vote of thanks. 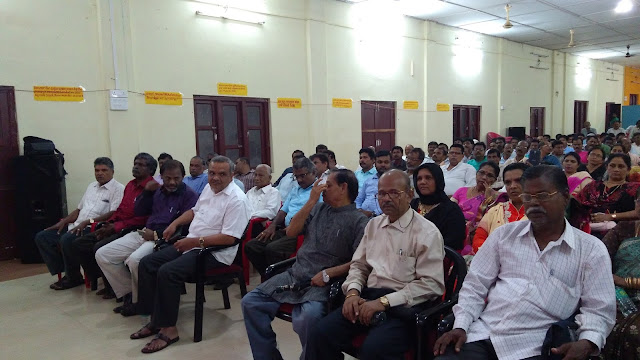 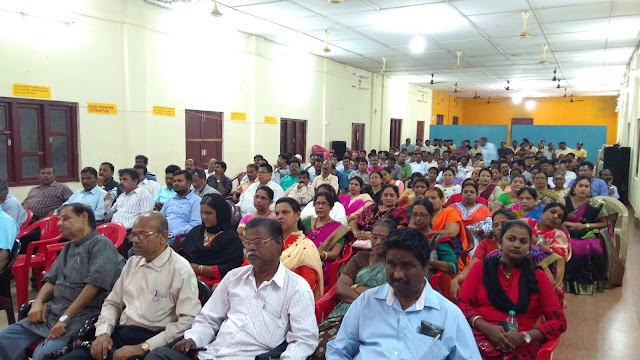 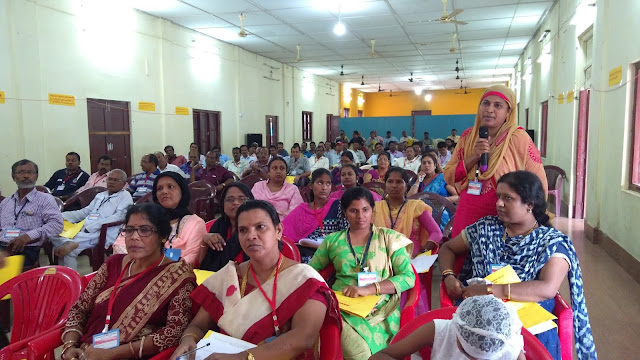 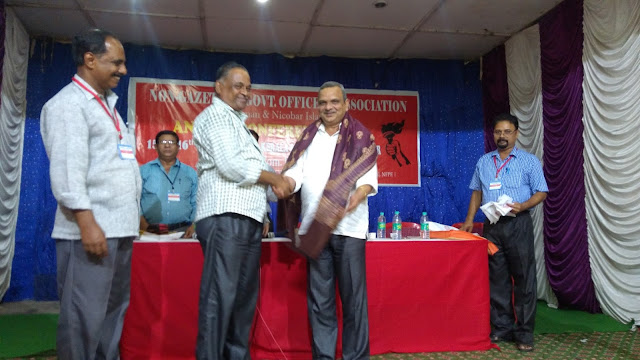 Posted by Confederation Of Central Government Employees at 4:08 PM