A report on the Asia-Pacific regional meeting of the

The WFTU’s Asia-Pacific regional meet was held at Chennai on 19th and 20th May, 2017.   On behalf of the Confederation of Central Government employees and workers,  its President, Com. K.K.N.Kutty was deployed to attend the meet.


WFTU, the World Federation of Trade Unions is the world body of all Trade Union organisations of the world i.e. only of the class oriented trade unions.  The Trade Union organisations of 112 countries which together has roughtly a membership of 9.2 Million are affiliated to WFTU.  Besides, these Trade Unions, which  normally represent the entire corss section of the workers  of each participating Nation,  WFTU also is structured into various TUIs (Trade Union Internationals) for different section of the workers, which meet and discuss the industry-wise problems.  The Public employees, i. e. the workers who are employed directly by the sovereign Governments of these countries  have constituted themselves into  the TUI-PAE (Trade Union International- Public and allied employees)  to which Confederation is directly affiliated.


Apart from organisational set up like Presidential Council,  which comes into being following the world conference that takes place once in five years,  the WFTU has also regional bodies.  India is a member Nation of the Asia-Pacific regional council of WFTU.    The  Regional meet normally and obviously take up region-specific agenda for discussion.  Cnennai meet was organised together by all Central Trade Unions of India affiliated to WFTU.   All India Bank Employees Assocaition (aibea) was the host unit.    The venue was Abu Sarovar Portico hotel at Chennai.  India, Bangladesh, Nepal, Sri Lanka, Pakistan, Cambodia, Philippines,  Indonesia, Iran, Kazakistan, Vietnam, Laos were the Nations to take part in the meeting.  The meeting was slated for two days i.e. on 19th and 20th May, 2017.  Pakistan could not send in their representative for the Government of India, refused visa as the application was said to have been received belated.  Cambodia and Kazakistan could not make it to attend the meet.


The meet began with the welcome address by Com. C.,H. Venkatachalam,  General Secretary, TUI- Finance as also of the All India Bank Employees Association.  Stating that Ist May day was observed for the first time in India in Chennai in 1923, he pointed  out  the glorious tradition of labour movements in Chennai.  In his brief welcome address, he drew the picture of the increasing pauperisation of the undeveloped, under-developed and developing countries at the hands of the rich Nations.  He said that many of the giant Trans National Corporations are bigger than many of these nations in terms of the GDP and thus they control the governance of many of these Nations.  He then narrated the hard resistance being organised by the workers of different Nations for which the WFTU  and its affiliated Federations  and Trade Union provide guidance and support.  Specially applauding  the efforts put in by the General Secretary of WFTU Com. George Mavarikos , who is scheduled to address the regional meet on 20th, he formally welcomed the delegates and observers and assured them of comfortable stay in Chennai on behalf of the Reception Committee.


Com. H. Mahadevan,  in charge of Asia-Pacific Regional  office presented an elaborate report touching upon inter alia, social security/social protection problems of workers in Asian Countries, the overall economic situation of the region and the problems faced by the workers in these countries,  the trade union co-ordination, common concerns and building cadre based and ideological oriented unions.   He also  gave a detailed report of the working of the regional office and the e-publication of its journal. He also said that he  and the regional office had made strenuous efforts to ensure the participation of Unions of all Nations in the region, but could not succeed due to many impediments created by the Governments.  He thanked specially those comrades who have come from countries other than India, and stated that he would look forward for a lively session.


Com. Deb Roye,  the National Secretary of Centre of India Trade Unions and the Deputy General Secretary of the  WFTU in his presentation  to the meeting emphasised the need for the TUIs to grow into an effective instrument of mobilisation of workers under the banner of WFTU.  The Finance capital driven neo liberal economic policies, which have now become the universal principle of economic governance of all countries, except a few socialist Nations, he said, has been conceived and designed to exploit the working class and transfer their savings into the hands of the rich people.  WFTU and its affiliates, he added are evolving ways and means to combat this menace and ensure that the workers’ rights are protected.


In the discussions, that followed thereafter, contributions and presentations were made by almost all the delegates and observers,  prominently by the National  President of Central of Indian Trade Unions , Com. Hemalatha and the National Secretary of All India Trade Union Congress, Com. Amarjit Kaur.  Com. Hemalatha in her brief presentation touched upon the sustained and continuous struggles organised by the Indian Working Class to oppose the economic policies of the Government of India, which was fashioned on the lines dictated by the IMF and World Bank.  She also talked of the emerging right wing forces in the country who could come to power exploiting the anger and anguish of the common multitude of the Indian Population who were pauperised during the UPA regime .  She said that the greatest challenge for the  Indian working Class was the disruption of the social secular fabric of the country by the divisive policies of the present Government.  Com. Amarjet Kaur specially dealt with the growing gender inequality in the world  with particular reference to the conditions prevailing in the Asia-Pacific region.  While the world working class would be celebrating the centenary year of the Great October revolution, this year, it would do good that the seminars and conferences organised to commemorate that great event, focuses on the plight of the proletariat in the present day world, she added.


Com. KKN Kutty, who made the presentation at the meet on behalf of the Confederation of Central Govt. employees detailed the issues and problems faced by the Public employees in India.  He made particular reference to the increased outsourcing of governmental  functions, contractorisation etc, whereby  almost one third of the workforce in both Federal and provincial Governments in India  have become contract workers.  He particularly referred to the withdrawal of the fine social security system of pension that was available for the civil servants in India  since the beginning of the 19th Century at the instance of the world bank.  By introducing the defined contributory system of pension, the Indian Government had been successful in mobilising huge funds to be placed at the disposal of the Indian and foreign corporate entities through the stock market.  He said that the Government  (from the employees of the Central and State Governments together) collects on an average of Rs. 192,000 crores per year as Pension contribution and the same is channelled through mutual funds to the stock market.   Stating that every  section of the working class  is discontent  due to the incessant attack on their livelihood and their rights by the successive Governments that came to power at the Centre and the States in the last 2-3 decades, he added that  the ruling class had been able to  garner  their   support through projection of divisive politics.   He added that a concerted effort  was  needed to face and defeat  this great danger to  the unity of the working class. Regional meet of the WFTU is the perfect platform to discuss the danger of the emerging right forces all over the world which acts as a catalyst  for the brutal exploitation of the workers, he  added.


The deliberations at the meeting was regulated by a Presidium selected from the Presidential Council members.


Com.George Mavarikos, General Secretary, WFTU, who addressed the meet the next day i.e. 20th May, 2017 passionately emphasised the need for a very strong, militant and class oriented world union of workers to combat the machinations of the ever greedy Transnational Corporations.  He added that only an ideological based and class oriented union would be able to protect the interest of the workers and fight against the National Governments, who help the corporate to loot and exploit.  He added that unfortunately, the entire working community of the world is not united.  The workers are misled by mal`-propaganda.  He said that most of the Multi National Corporations  indulges in plundering the natural resources with the active assistance and help provided by the National Governments, whom they control with money power.  He said that the globalisation and the present neo liberal policies  pursued by most of the countries at the instance and direction of the world financial institutions like World Bank and International Monetary Fund and the World Trade Organisations are the instrumentalities to perpetuate poverty permanently on the working people.  As has been seen in most of the developed countries,  the right wing forces have been successful  in brazenly manipulating the public resentment emanated from the ever decreasing standard of life in their favour and usurp state power.  The agenda of the TNC to own and control the media was in realisation of its extreme potential to manipulate public opinion.   He said that WFTU is in the pursuit of transforming the present situation into a powerful proletariat controlled State power to ensure that the wealth and resources of the world do not become the province of  a few.  He wanted the delegates who attend the meet to realise that over the years, when  these policies were in currency, wherever they were,  the inequalities have grown and the wealth  and National assets have gone into the hands of a few private citizens.  This phenomenon is true, he added, in  all cases, be it a developed  or developing nation.  He specifically referred to the Durban declaration adopted by the WFTU in its 17th  international Congress and exhorted the affiliated Associations the need to propagate those amongst the rank and file of the workers to bring about the desired transformation of the society.


At the end of the deliberations, the Regional meet adopted a declaration called the Chennai conclusion.  The operative portion of the declaration, which deals with the programme of actions is reproduced below:


1.       Observation of International working class day (May Day) WFTU  day (3rd October,) International Women’s day (8th March) on a grand scale involving the mass of workers in each country in the region.


2.       Solidarity programme in support of Garment textile and allied workers of the Asian region, spread over in many countries of the region.


3.       Campaign and mobilisation against the increasing trend of atypical of employment such as casual, contract, outsourcing etc. including other precarious forms of working and the supply chains of MNCs/TNCs using these systems.


4.       Formation of Asian women workers forum  and sustained campaigns on their specific demands; forum for domestic workers in the region and fight for their cause.


5.       Platform for young workers on their related issues and demands through campaigns workshops, programmes etc.


6.       Observation of the Centenary of October revolution under the banner of WFTU. ( as also the bicentenary of  Karl Marx)


7.       Campaign against embargo on Cuba and closing down of US Prison in Guantanamo Bay and handing over the land  to Cuba.  . 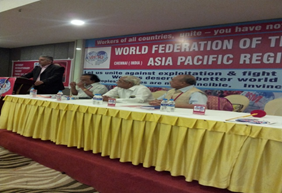 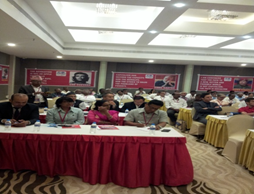 Com. George Mavarikos addressing the WFTU regional meet at Chennai(left) and a view of


the delegates. (right)
Posted by Confederation Of Central Government Employees at 12:52 PM