PRIME MINISTER NARENDRA MODI, IN A SUDDEN ADDRESS TO THE NATION, ANNOUNCED THAT RS 500 AND RS 1,000 DENOMINATION NOTES ARE BEING WITHDRAWN FROM MIDNIGHT. HE SAID THAT SUCH NOTES WILL BECOME "MERE PAPER". 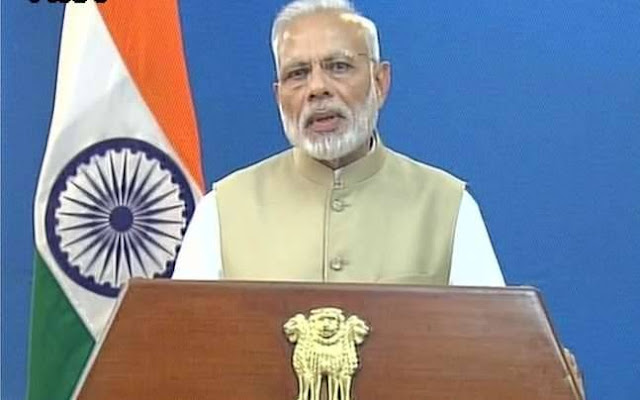 PRIME MINISTER NARENDRA MODI TODAY ANNOUNCED THAT RS 500 AND RS 1000 BANKNOTES WOULD BE WITHDRAWN FROM THE FINANCIAL SYSTEM AT MIDNIGHT, SAYING IT WAS PART OF A CRACKDOWN ON RAMPANT CORRUPTION.

IN AN UNPRECEDENTED MOVE, PRIME MINISTER NARENDRA MODI ADDRESSED THE NATION THROUGH DOORDARSHAN, INDIA'S STATE TELEVISION. HE IS SCHEDULED TO MEET PRESIDENT PRANAB MUKHERJEE AFTER HIS TELECAST.

THIS IS THE FIRST TIME MODI ADDRESSED THE NATION IN THIS MANNER SINCE HE WAS ELECTED MORE THAN TWO YEARS AGO. THE ADDRESS WILL BE FIRST IN HINDI, FOLLOWED BY AN ENGLISH TELECAST.

MODI'S ADDRESS TO THE NATION COMES AT THE END OF THE DAY IN WHICH HE MET THE THREE CHIEFS OF THE ARMED FORCES - ARMY CHIEF DALBIR SINGH, NAVY CHIEF SUNIL LANBA AND INDIAN AIR FORCE VICE CHIEF BS DHANOA - TO REVIEW INDIA'S SECURITY FOLLOWING THE TENSION WITH PAKISTAN.

National Security Advisor Ajit Doval was also present at the meeting. The Prime Minister then chaired a meeting of his senior ministers.

The meeting came as tension along the India-Pakistan border continues, with over 100 violations from the Pakistani side since the surgical strikes that India carried out on terror launch pads in Pakistan-administered Kashmir in the intervening night of September 28-29.

Posted by Confederation Of Central Government Employees at 5:32 PM