EMPANELMENT OF RETIRED OFFICERS AS THE INQUIRY OFFICERS FOR CONDUCTING DEPARTMENTAL INQUIRIES AGAINST THE DELINQUENT OFFICIALS - REG.

Will the PRIME MINISTER be pleased to state:

(b) if so, the details thereof and if not, the reasons therefor;

(c) whether Government is aware that experts have pointed out that under the National Pension System(NPS), economic downturns can affect pensions as it is market-linked;

(d) whether Government is aware that under NPS, there is no proper safety net for retired employees as under the OPS;

(f) if so, the details including timeline regarding the same?

There is no proposal to reintroduce old pension scheme to Central Government civil employees joined on or after 01.01.2004 under consideration of Government of India.

The returns being market linked is a basic design feature of the National Pension System (NPS), however, pension being a long-term product also enables the investments to grow with decent returns, despite short term volatility. Further, the prudential guidelines stipulated by the Pension Fund Regulatory and Development Authority (PFRDA), the skills of the professional Fund Managers chosen through a rigorous process, and choice of asset allocation across various asset classes (Equity, Corporate Bond, Government Securities) enable the subscriber’s accumulations to grow over the long term, riding over the short-term volatility.

To safeguard the interest of the subscribers against any possible erosion of the pension wealth in times of an economic downturn, the exposure of equity/ equity linked instruments have been limited to only 15 % in the default scheme, which is made available to the Government subscribers in a default mode. Equity exposure exceeding this limit of 15% is only available for the subscribers who choose to exercise individual investment choice while moving out of the default scheme. Further, risk averse subscribers can also choose to invest their entire contribution (100%) in Government bonds 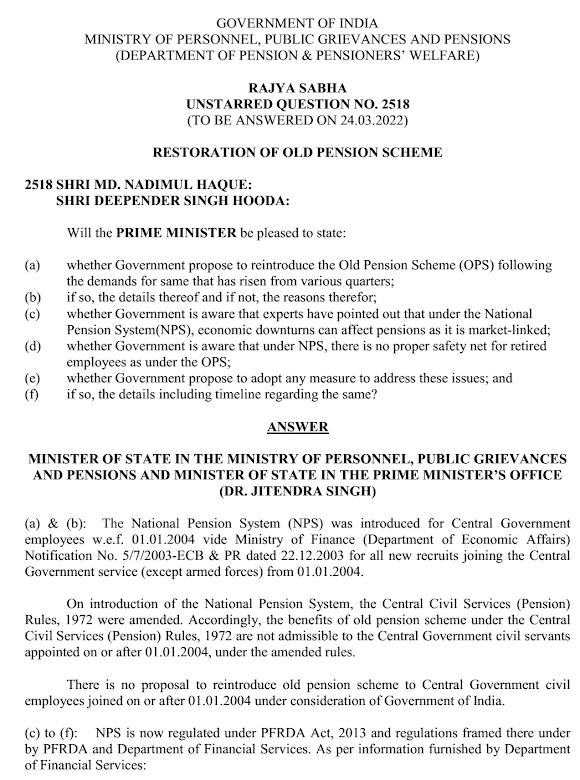 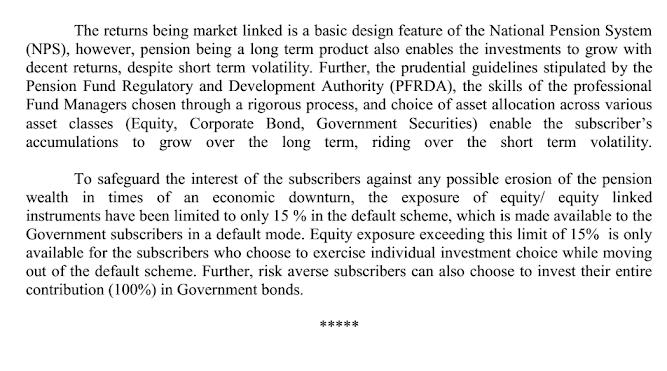 Posted by Confederation Of Central Government Employees at 12:59 PM