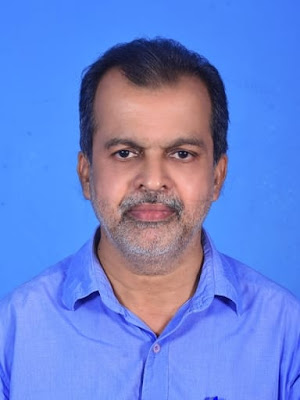 He has also served for a long time as the Circle Convener of the NFPE KERALA State Coordinating Committee, Circle Secretary and All India President of  All India RMS and MMS Employees Union, Group C. He has played a leading role in the many struggles for rights of C. G. Employees and Postal-RMS employees at the All India and State level. He joined the service in 1983 at Vadakara RMS. Presently he serves as Sub-Record Officer in Kasargod RMS. He is holding the post of the President of Kasaragod District Postal Employees Co-operative society and staff side secretary of RJCM. He started his union activities as the Branch Secretary of R-3 union and after division/circle union office bearer and AGS of R-3 CHQ for many years.

He is a very simple, soft-hearted man. At the same time, he is having very good, strict personality and is dedicated to organisations. His ideological commitment is an inspiration to us. Always he tried his best to strengthen the organisations. Salute to him for his excellent role in organisations.

With best wishes and red salute to Com P V Rajendran, our beloved leader on his day of retirement from service on superannuation.

Posted by Confederation Of Central Government Employees at 8:32 AM