It was a day of amusement at the Bengaluru Bench of Central Administrative Tribunal. As the DG of CPWD Prabhakar Singh had not apologized for contempt of Court, it decided to send him to jail..........

It was a day of amusement at the Bengaluru bench of Central Administrative Tribunal on Friday, July 27. The Tribunal was hearing a contempt petition against Central Public Works Department (CPWD) director general Prabhakar Singh as he had gone ahead and issued large scale transfer and posting orders of engineers as a part of the restructuring of CPWD despite the Tribunal having put a stay on it on June 4, 2019.

In court, before pronouncing the order, the two member bench of Judge KB Suresh and CV Shankar enquired about Singh’s health, to which the DG responded that he only had the usual blood pressure and diabetes problems. Persisting with the same line of questions, the Court wanted to know if Singh had any special health conditions and DG responded in the negative.

Then the Judge went on to pronounce the verdict which included a one-month simple imprisonment for ignoring the stay order of the Court and not appearing before CAT earlier, despite being ordered to. On hearing the verdict, a fluttered Singh collapsed unable to believe the sentence given.

On seeing the DG collapse, the lawyer requested the Judges to be lenient with the DG. The judge said he was forced to pass such an order because the DG was refusing to apologize to the court despite there being a contempt case against him and because he continued to pass several orders even after June 4, 2019. The Bench said if he didn’t apologize, the court would call the Ministry of Housing and Urban Affairs Secretary Durga Shankar Mishra on July 30.

On hearing this, the Lawyer persuaded the DG Prabhakar Singh to give a written apology. Remaining adamant, Singh said that he had passed the orders at the behest of the Minister. On further pleas from the lawyer and after consultations with Secretary Mishra, Singh tendered an undertaking expressing his regret and that he would cancel all the impugned orders.

On receiving an unconditional apology from Singh, the Court accepted his apology and closed the matter.

And now, Singh has filed a Writ Petition in Karnataka High Court stating that he was threatened and hence he apologized. HE has even made the Judge a party in his petition.

The CPWD Engineers Association had challenged the restructuring of CPWD, which Singh had ordered in March and the Association alleged that it has not following the procedures suggested by the consultancy Ernst & Young.

This wasn’t the first time a Court had observed that Singh had tried to overreach orders passed by a Court. In a ruling in the Delhi High Court on July 8, 2019, the Judges stated that they were of the view that “the petitioners (Prabhakar Singh and Durga Shankar Mishra) have made every attempt to overreach the orders of the Court so as to ensure the respondent (an executive engineer in the electrical department) doesn’t reap the fruits of the judgement in his favour”.

In an order on June 11, 2019, the DG stated that eight executive engineers of the electrical division who have jurisdiction within Delhi Circle have to hand over their charges to the newly posted electrical engineers.

Ignoring the stay orders related to transfers and promotions of engineers passed by CAT, Prabhakar Singh had promoted 10 Assistant Directors to the grade of Deputy Directors on June 21, 2019.

In fact, Singh had even stated that the ministry was not deterred by the stay in Court against the re-structuring and would go ahead with their plans.

Reiterating former transfer orders, the office of the DG sent out a memo on July 9, 2019, castigating all the officers who despite being served transfer orders haven’t reported to their new place of posting. He asked them to comply with the orders even though the Tribunal had stayed the orders and threatened them with disciplinary action.

According to sources, Singh is working out how to cancel the orders passed by the Ministry and the Minister. 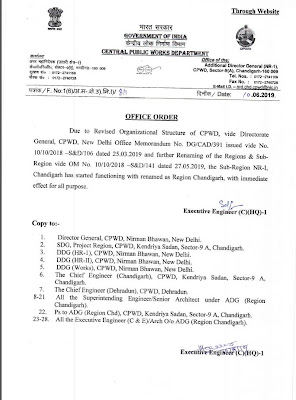 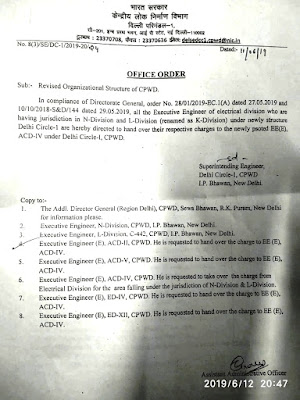 The term of Prabhakar Singh has been extended by another six months and his term will end by January 31, 2020, unless the government decides to extend it again.

This is the second extension being given to Singh despite several corruption cases pending against him,

The government modified the hiring guidelines in June 2018 to promote SDG (Elect) Prabhakar Singh as the DG. He was set to retire on July 31, 2018, exactly a month after his promotion, but the government again violated the DoPT norms and statutory rules such as the FR-56 and re-employed him for one more year even though there were several other eligible officers who could be promoted as the DG.

FR-56 is the retirement procedure of the government and Department of Personnel and Training (DoPT) is the Central Government’s coordinating agency for recruitment.


Posted by Confederation Of Central Government Employees at 6:31 PM