BRIEF REPORT OF 13th  AIC OF AICAEA, 5th  AIC OF AICAEA CAT II AND 5th  NATIONAL CONVENTION OF NATIONAL WOMEN COMMITTEE OF NFCAA
13th All India conference of All India Civil Accounts Employees Association (AICAEA), 5th All India Conference of All India Civil Accounts Employees Association category II (AICAEACAT II), and 5th National Convention of the Women Committee of National Federation of Civil Accounts Associations (NFCAA) were held jointly at Kolkata from 9th to11th July 2013.
The Inaugural Session of above events held on 9th July from 10 a.m. in the Ashutosh Birth Centenary Hall, Kolkata was inaugurated by Com. Basudeb Acharia, Member of Parliament. Welcome address on behalf the Reception Committee for the Conferences and Women Convention was offered by Com. Sib Shankar Roy, Chairman. The session was addressed by Com. Pijush Roy, General Secretary, Co-ordination Committee of the Central Government Employees and workers Unions and Associations’ West Bengal, Com.A.B.Sunilkukar, President, All India Association of Pay and Accounts Officers (Civil) and Com. M.Duraipandian, President, All India Audit and Accounts Association. All ex-leaders of the Association who were available in the hall were honored and invited to seat on the Dias.
The Open Session held at the same venue from 2 p.m. was inaugurated by Com. M.  Krishnan, Secretary General, Confederation of Central Government Employees and Workers. In his one and a half hours long inaugural speech Com. Krishnan narrated various issues concerning with the working class as a whole and explained the status and justification of some of important items listed in the 15 point charter of demands of the Confederation which includes the demands like - setting up of 7th CPC, merger of DA, scrapping the New Pension Scheme and removal of 5% cap in Compassionate appointments etc. He also explained the steps taken by the Confederation to build up united movement with Railway Federations and All India Defence Employees Federation and asked the delegates to prepare for sustained struggle for the achievement of the 7 point Common Charter Of Demands adopted by these federations under the platform of JCA. Com.K.P.Rajgopal, Secretary General, Income Tax Employees Federation, Com. Giriraj Singh, All India RMS & MMS Employees Union Gr.C and Com.  K. V. Jairaj, Secretary General, National Federation of Atomic Energy Employees also addressed the open Session.

The Joint Delegate Session of AICAEA and AICAEACATII held on 10th July2013 in hall of   I.C.M.A.R.D., Kolkata was inaugurated by Com.S.K.Vyas, Advisor, Confederation of Central Government Employees &Workers. Com. T. Satnarayana, General Secretary, All India Postal Accounts Employees Association also addressed the session. The Chief Guest of the Joint Delegate Session Shri Jawhar Thakur, Controller General of Accounts, Ministry of Finance, Department of Expenditure could not attend due to ill health. However, through a written message he offered his greetings to the delegates and assured his cull co-operation to AICAEA and AICAEACATII.

Veteran leaders and delegates retired during the period of last two years were felicitated by the Reception Committee in the joint Delegate session.
The 5th National Convention of National Women Committee was held at 2 p.m. at the same venue was inaugurated by Com.(Smt.) Malini Bhattacharjee, Ex-MP and National Executive Member of AIDWA. Com.(Smt.) Sumitra Goswami, ex-President of Co-ordination Committee of the Central Government Employees and workers Unions and Associations’ West Bengal greeted the participants in the Convention. A nine member Women Committee has been elected in the Convention with Com. (Smt.) L. Swaminathan as Chairperson and Com.(Smt.) Kalpana Dutta as Convener.

The Delegate Sessions of both AICAEA and AICAEACAT II were held separately till 11th July 2013. Shri C. V. S. Prasad (ICAS), Controller of Accounts, Ministry of Mines attended the Joint Delegate Session on 11th July 2013 and greeted the delegates. He was offered felicitation by the Reception Committee.


All Branches/Delegates/Central Headquarters congratulated and offered their thanks to the Branches of West Bengal and the Reception Committee for the elaborate and comfortable arrangements made by them to make the conferences and Women Convention successful. 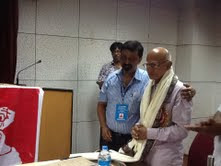 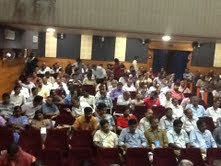 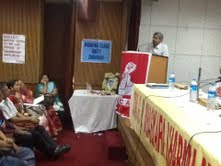 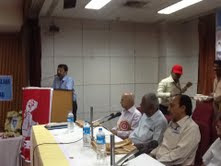 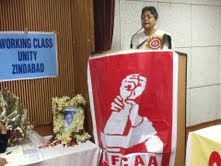 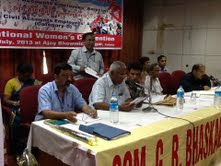 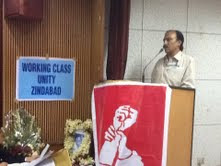 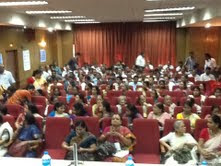 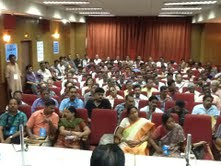 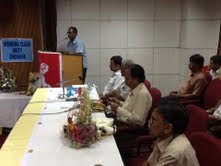 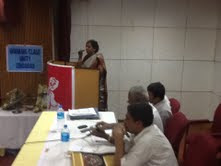 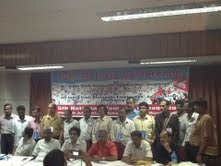 Posted by Confederation Of Central Government Employees at 11:38 AM