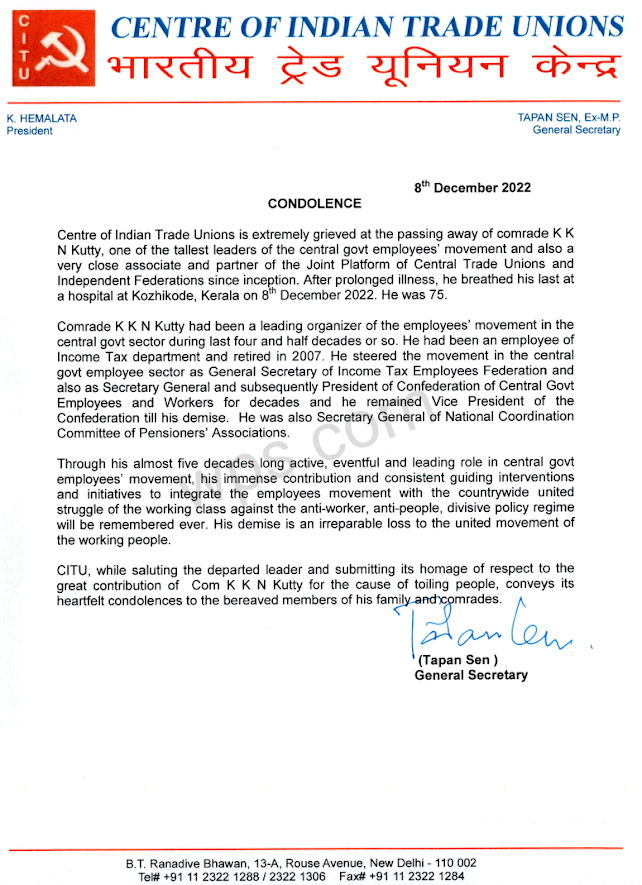 Comrade KKN Kutty the Secretary General NCCPA and the Vice President Confederation of CG Employees & Workers has breathed his last today morning (08.12.2022) at Kozhicode after a prolonged treatment in different hospitals including a super specialty Hospital.

After information about some hope of revival in ICU, ultimately doctors confirmed Hus passing away.

The CG Employees Movement and the Pensioners Movement has suffered an irreparable loss and the vaccum caused by the sudden demise of Comrade KKN Kutty will remain so for many years to come.

He was a spectacular orator and his speeches were always very much impressive and all the spectators were spell bound whenever he speaks in the assembly of employees or pensioners.

He was the former Secretary General of Income Tax Employees

A versatile personality and he used to guide the movement in turbulent waters. His parting away is a great loss.

No words will be sufficient to express our grief.

Com. KKN Kutty leads the Central Government Employees movement for the last 40 years. He was Secretary General and President of Confederation, Secretary General of Income Tax Employees Federation and National Co-ordination Committee of Pensioners (NCCPA) for many years.

His demise is a great loss to the working class and CG employee’s movement.

We conveying our deep grief and condolences. Red salute to com. KKN Kutty.

Posted by Confederation Of Central Government Employees at 12:43 PM