Report on Dharna conducted by CCGGOO on 25.02.2016 at Jantar Mantar New Delhi

Shri.Raman Sharma, Chairman of CCGGOO from Railways, lead the Dharna, a historical event, first of its kind for entirety of Gazetted officers Community in Jantar Mantar in the presence of veteran leader Pandey from CPWD.

Com.M.Krishnan General Secretary of Confederation of Central Government Employees and Workers inaugurated the Dharna and extended his fraternal support to the CCGGOO. He spoke at length emphasizing the need for unity among the employees and officers to fight against the anti-labour recommendations of 7th CPC.

Before its inauguration, all the participants hailing from various parts of the nation raised slogan that rent the air demanding settlement of their problems including the demand for setting up Grievance Redressal Machinery for the Gazetted officers like JCM which is available to all other category of employees in Central Government.

Com.T.K.Rengarajan , Member of Parliament from Rajyasabha, attended and greeted the Dharna. He elaborated the evil character of the NDA Government headed by BJP detrimental to the interests of the working class. He urged upon the unity to face the onslaughts unleashed by the Government under the garb of neo liberal economic policies.
Com. Shiva Gopal Mishra Secretary General of All India Railwaymen Federation (AIRF) and Secretary, Staff Side National JCM (Joint Consultative Machinery) attended   and graced the Dharna.

His eloquent speech revolved around the retrograde recommendations of the 7th CPC and the strategy of the trade unions to go in for agitations to settle the grievances over the worst recommendations of a pay commissions in the Independent India.

Com Mahesh Kumar All India President from Postal and Telecom Accounts,Pandey from CPWD,Indra Reddy from ordnance Factory, Chandramouli from Central Excise, Bhaskar Bhattacharya from Income Tax, Pawan Kumar Zindal from DGQA, Smt.Gunavathy from Income Tax, V.Narmatha from Audit and Accounts, Verma, Uttar Pradesh Brotherhood from Audit and Accounts, V.Bhattacharaya from Delhi COC, Giriraj Singh, President, NFPE, Sundaramamani from Statistical Services, Yadav from Postal Com M.Nesaraj Selvam ,from, Postal and Telecom Accounts , Jitendar Singh from Indian Railway promotee Officers, Venugopal Nair from Customs, Jain from pay and accounts and other leaders from Railways Spoke on the Occasion. Every Leader of the Gazetted Officers reiterated their commitment toward CCGGOO and explained in detail of the injustice done to them by the 7th Central Pay Commission

Com Mohan Secretary General of the CCGGOO in his thanks-giving address enthusiastically announced that this Dharna created history in the annals of movement of Gazetted Officer Associations .He proclaimed it gave new confidence and new hope among the Gazetted officers that they will gain  enormous strength in the days to come to face the challenges .He explained in detail about the Meeting with the Joint Secretary, Pay Commission implementation Cell on 24th February by 3.00 P.M in Ashoka Hotel in Delhi. He informed the audience that the Meeting was very positive and exhorted that we can achieve our demands only based upon our strength. He also told that the Joint Secretary assured the leaders to provide an opportunity before the empowered Committee. He thanked Com.M Krishnan, Com. Shiva Gopal Mishra and T.K Rengarajan and all the member-organizations and comrades who made the Dharna a grand success.


In all, 650 in number representing various central Government departments all over India participated in the Dharna. After the Dharna was over, the participants dispersed with renewed vigour, enthusiasm and hope for a new dawn in their movements with their active participation. 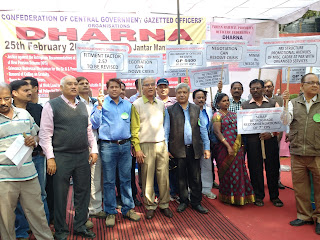 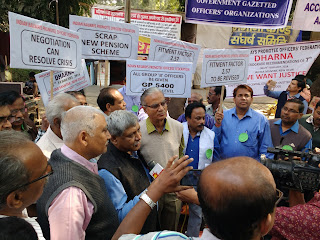 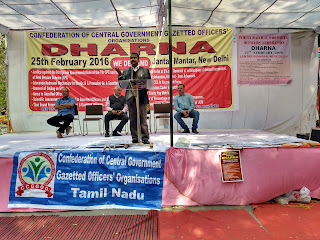 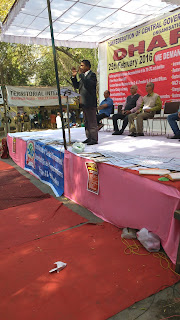 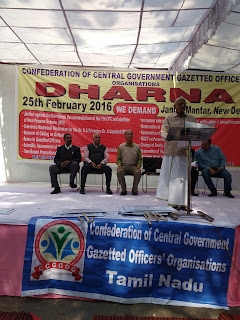 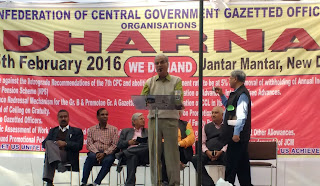 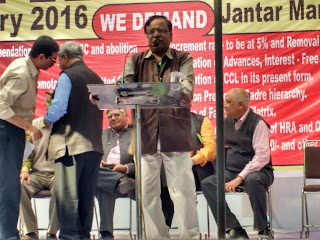 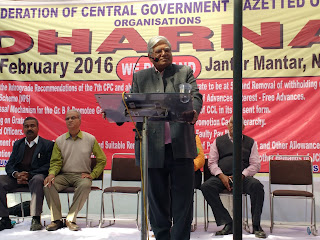 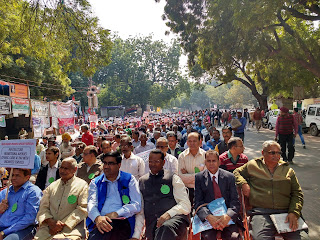 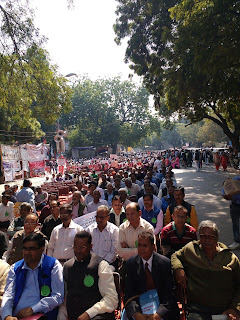 Posted by Confederation Of Central Government Employees at 12:34 PM