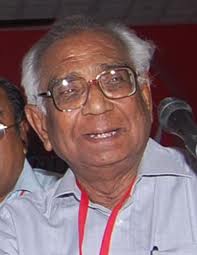 RED SALUTE TO COMRADE M.K. PANDHE!
Com: MK Pandhe, Former President of CITU and Polit Beaureau Member of CPIM expired at 12.20 am on 21st August 2011. Com Pandhe was the voice of the working class and the toiling masses. He was a guiding force for the Confederation of Central Govt employees & Workers.
In his death we have lost a true friend of Confederation, a comrade who never minced words – to criticise and appreciate.
We Dip our Flag in his Memory.
Posted by Confederation Of Central Government Employees at 9:50 AM