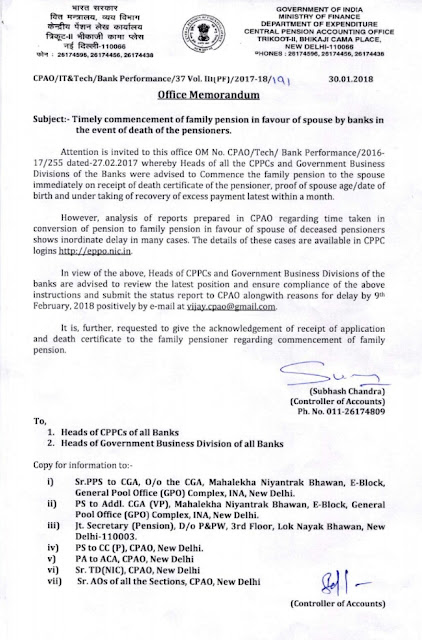 Posted by Confederation Of Central Government Employees at 3:36 PM No comments: Links to this post


Posted by Confederation Of Central Government Employees at 12:51 PM No comments: Links to this post


On 15.02.2018, Finance Minister, Sri Arun Jaitley has moved following resolutions in the Parliament to reject the two ARBITRATION AWARDS which are in favour of Central Govt Employees.


(2) Revision of rates of Transport Allowance. 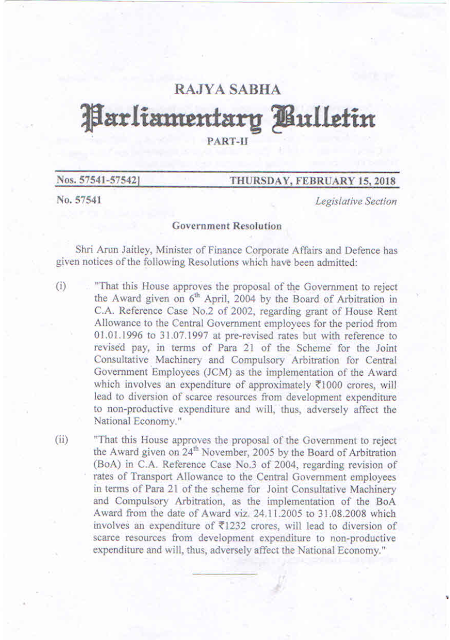 Posted by Confederation Of Central Government Employees at 12:01 PM No comments: Links to this post

IMPORTANT CLARIFICATION ON EXEMPTION FOR IT THOUGH NPS 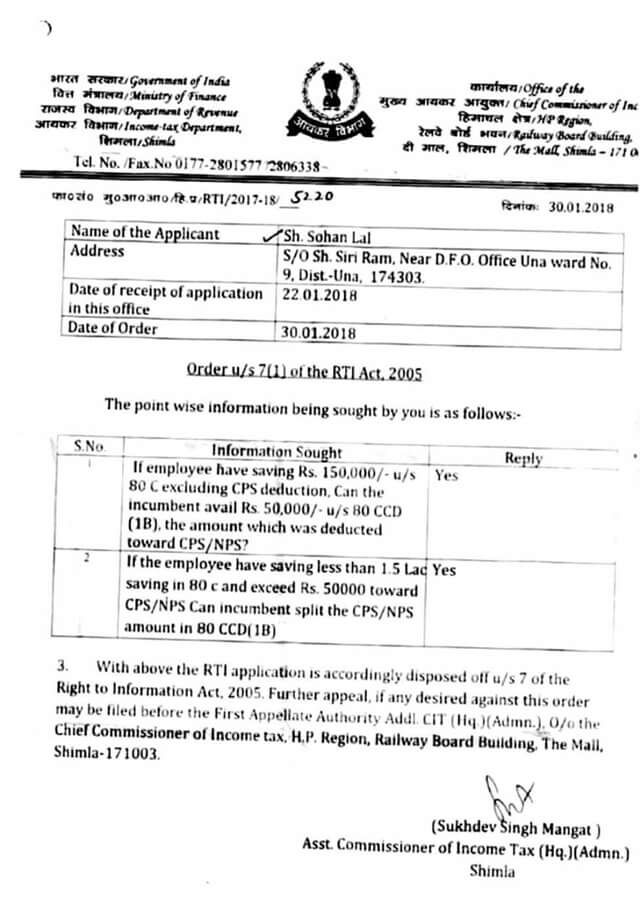 Posted by Confederation Of Central Government Employees at 12:43 PM No comments: Links to this post

Posted by Confederation Of Central Government Employees at 3:29 PM No comments: Links to this post

The meeting of the Central Trade Unions held on 22nd February 2018 at INTUC Office New Delhi expressed indignation and strongly condemned the Government of the day for their intensified attack on the lives and livelihood of the people and seriously compromising the national interest.

Attack on working class centering around dismantling labour laws designed to completely casualise employment conditions through various routes like amending Contract Labour Act, introducing Fixed Term Employment etc has assumed aggressive height. Further it is noted that the Government is out to erase the public sector from the industrial map of the country.  Specific cases of attack on privatization of railways, opening coal mining to private and foreign companies without any restriction whatsoever, mass scale privatization as well as destruction of defence production network through widespread outsourcing, thereby  dismantling the  almost half of the ordinance factories are some of the examples of the gross anti-people and anti-national actions of the Govt. Accumulation of huge non-performing assets of the public sector banks arising out of pilferage of bank-funds by deliberately defaulting private corporate coupled with recent explosion of frauds with bank fund engineered by the same corporate class is also a reflection of the anti-national act of the Govt indulging and patronizing the same big-business class.

The Central Trade Unions reiterated their utter condemnation against the Union Budget 2018-19 which is basically anti-worker and anti-people in character and engineered a deception on the mass of the people through loud populist slogans without actually making any resource allocation.

The Central Trade Unions denounced the Govt of India’s surreptitious move in postponing the 47th session of Indian Labour Conference, thereby reducing tripartism to a mockery.

CTUOs noted with satisfaction the surging struggles by the working people in different sectors throughout the country, both organised and unorganized.

The workers and federations of coal and transport have been preparing for united industrywide actions to be undertaken shortly. All the Federations of Defence Production workers have jointly decided to go in for nationwide strike on 15th March 2018. Many more sectoral actions are in the offing.

The CTUOs while reiterating their resolve to intensify preparation for indefinite strike in the days to come, calls upon all their constituents and working people in general irrespective of affiliations to jointly observe

ALL INDIA PROTEST DAY ON 15TH MARCH 2018
·    In solidarity with the striking Defence Production workers against anti-national privatization move
·    Against the Anti-people Deceptive Union Budget 2018-19.

The CTUOs will meet shortly after 15th March 2018 to decide their next course of united countrywide action.

Posted by Confederation Of Central Government Employees at 11:29 AM No comments: Links to this post

(Click here to view)
Posted by Confederation Of Central Government Employees at 10:48 AM No comments: Links to this post

No Permission is required for getting listed Investigations/ Treatment Procedures done at the CGHS empanelled Diagnostic Centres/Hospitals, if prescribed by CGHS Medical Officer/ CMO Incharge or Government Hospital specialist.

Listed Investigations/Treatment Procedures prescribed by a specialist of empanelled hospital need to be endorsed by the referring CGHS Medical Officer/ CMO Incharge, however permission is not required in this case also.

For unlisted Investigations/Treatment Procedures permission is required from the AD of the City/Zone in case of pensioners and Head of Department/Office in case of serving employees. However for pensioners of Autonomous bodies the permission is to be given by the concerned department only.

The following documents are required to be submitted:
1. Self attested copy of prescription of CGHS Doctor / Government specialist
2. Copy of CGHS Card of the patient and main card holder.
3. Original Prescription and Original Cards are to be produced at the centre for verification.

Investigation can be done within 14 days of the advice only.

Procedure for getting for any treatment procedure done at an empanelled hospital
The following documents are required:
1. Self attested copy of prescription of CGHS Doctor / Government specialist
2. Copy of CGHS Card of the patient and main card holder.
3. Original Prescription and Original Cards are to be produced at the centre for verification.

Treatment procedures can be done within 3 months of the advice only.
Posted by Confederation Of Central Government Employees at 3:57 PM No comments: Links to this post 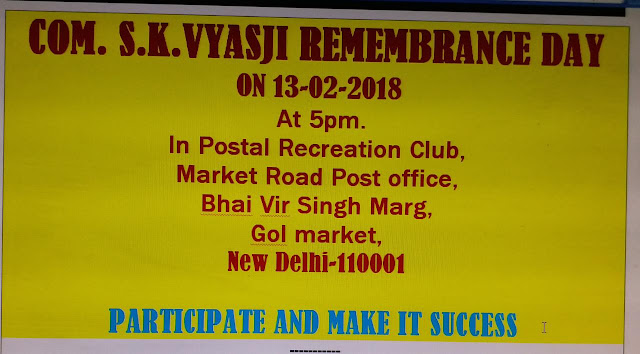 Posted by Confederation Of Central Government Employees at 10:29 AM No comments: Links to this post

The Hon'ble Primie Minister of India

The system of pension as a social security benefit to the employees in Government sector in India has been existing since the early British days. After independence the pension system was further improved and family pension was also introduced . The Defined pension scheme for the government employees is a well-built scheme as the best of all social security benefits for the employees and they are not required to contribute anything for pension.

Government of India introduced contributory pension to employees those who entered in government service on or after 1.1.2004 .Majority of the state Government s also introduced the same for their employees. The Contributory Pension Scheme is totally depend on the profit and loss in the share market and Government have no control on the fund and it has nothing to do with the welfare of the employees or any individual or even Government finances.

The concept of pension as elaborated by the 4th Central Pay Commission, is 'Pensions to the former members of armed forces and civilian employees of Central Government is not by way of charity on an ex-gratia payment, or a purely social welfare measure was totally changed by . It is in the nature of a “right” which is enforced by the law”. Later the concept was further strengthened by the Land mark Judgement delivered by the Supreme Court in 1982 in a Writ Petition filed by D.S.Nakara Vs the Union of India. Supreme court declared that the Pension is not only compensation for loyal service rendered in the past but has also a broader significance in that it is a measure of socio-economic justice which inheres economic security in the fall of life .The PFRDA Act is against the earlier ruling of the Supreme Court on the employees' Right to Defined Benefit Pension as cited earlier.

There is no assurance, for getting pension ,except market based guarantee in NPS. The stock markets have never remained consistently strong over a long period of time. This volatility of stock market is a cause of serious concern about the sustainability of the National Pension Scheme itself.

Contract Labour is one of the acute form of unorganized labour. Under the system of contract labour, workers are employed on the contract basis. The contract worker is a daily wager or the daily wages are accumulated and given at the end of the month. Contract workers are paid much lower wages than they would be entitled to under direct employment. This system led to whole-scale exploitation of labour, and a series of demands were made before tribunals for the abolition of contract labour system.

The system of employing contract labour is prevalent in civil service and in the services sector. The civil service has a major role in the smooth functioning of a Democratic Government. As part of overall development of the society and increase in population, the civil service also must be extended its wing. Education, Health, Public Transport, Communication, Welfare measure to women and children are all developed much. Numerous job opportunities have created round the world in Government Service.
The regular appointment to government sector ceased. Instead contract employment started. As such it is seen that the number of regular employees in the civil service are decreasing day by day, whereas the number of daily waged/contract/outsourced employees are increasing . By this time all the centrally sponsored schemes also emphasis on contract appointment. All the flagship programmes of Government of India are implementing with Daily waged/Contract/Casual appointment.

Bypassing UPSC and State Public Service Commission and Employment Exchanges which are the main recruitment agencies for central and State Governments, Unemployment among the educated youth is the main reason for Contract Employment. On contract employment the appointment is for limited monthly income. This is a kind of exploitation of labour.

The Supreme Court of India in a Land mark Judgment ruled that temporary employees performing similar duties and functions as discharged by permanent employees are entitled to draw wages at par with similarly placed permanent employees. The principle must be applied in situations where the same work is being performed, irrespective of the class of employees. The constitutional principle of 'equal pay for equal work' has been upheld by the Supreme Court of India.

Posted by Confederation Of Central Government Employees at 3:42 PM No comments: Links to this post